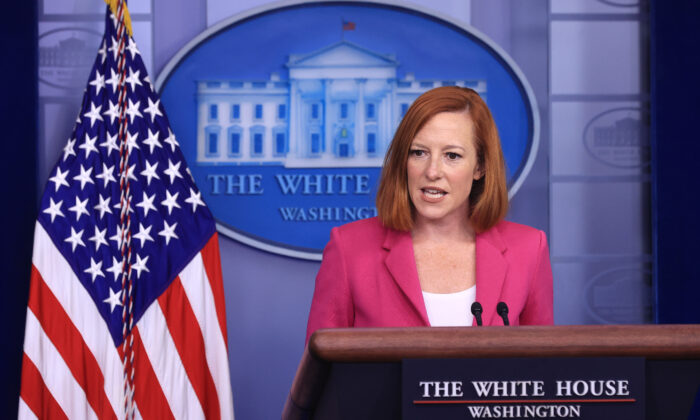 White House press secretary Jen Psaki told reporters that the Biden administration has been in communication with local law enforcement in Kenosha, Wisconsin, of possible unrest following the verdict in the Kyle Rittenhouse case.

A jury of seven women and five men declared Rittenhouse, who was accused in the shooting deaths of two men on a night of riots and protests last year, not guilty on all five charges on Friday afternoon. The most serious charge would have carried a maximum sentence of life in prison.

Psaki on Friday said that the White House “has been in close touch with officials on the ground through law enforcement channels” to ensure they are “supporting any effort towards peaceful protests.”

“That’s certainly what we will continue to encourage as anyone looks to have their voice heard, regardless of the outcome,” she continued, without offering a comment on potential riots, arson, and unrest.

The verdict was read while Psaki was speaking to reporters. She declined to comment.

“Obviously this happened while I was out here,” she told reporters. “Let me talk to the president and talk to our team and we will get to a statement as soon as we can.”

“I’m not going to give an assessment of this from here,” Psaki said, adding: “Let us get you a statement as soon as we can.”

Rittenhouse, during the trial, had testified that while armed, he traveled to Kenosha to protect local businesses from being burned down during riots, arson attacks, and looting that erupted alongside protests after the officer-involved shooting of Jacob Blake.

This week, protesters began to congregate outside the Kenosha Courthouse. Some of them appeared to make threats of violence.

“We’ll shut everything down,” one protester shouted Friday ahead of the jury’s verdict. “The justice system, this whole system.”

As he dismissed the jurors who sat in judgment in the politically combustible case, Circuit Judge Bruce Schroeder assured them the court would take “every measure” to keep them safe.

A sheriff’s deputy immediately whisked Rittenhouse out a back door through the judge’s chambers. In reaction to the verdict, prosecutor Thomas Binger said the jury had spoken.

Rittenhouse’s mother, sitting several feet away from him on a courtroom bench, gasped in delight and began crying as the clerk read out the string of five not-guilty verdicts. She hugged others around her.

Previously, Gov. Tony Evers pleaded for calm and said 500 National Guard members would be ready for duty in Kenosha if needed.