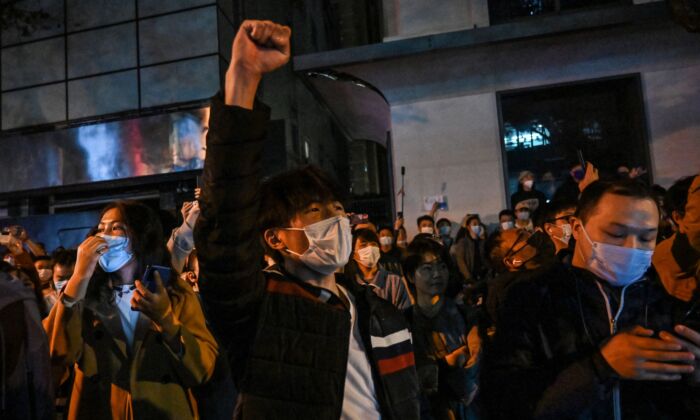 People sing slogans while gathering on a street in Shanghai on November 27, 2022.(Hector Retamal/AFP via Getty Images)
By Dorothy Li

Dorothy Li
Dorothy Li is a reporter for The Epoch Times based in Europe.
View profile
and Sophia Lam

Protests erupted in Shanghai and on university campuses across the country over the weekend, with crowds calling for the Chinese Communist Party (CCP) and its top leader to step down, in a rare display of public dissent that the country hasn’t seen in decades.

The latest wave of widespread anger, from the capital of Beijing to the southern city of Nanjing, occurred after massive protests broke out in the far west region of Xinjiang, where strict COVID-19 curbs were blamed for 10 deaths and nine injuries in a high-rise apartment fire in Urumqi, the region’s capital city. Local authorities denied the accusation.

In Shanghai, crowds of demonstrators gathered for a vigil at Wulumuqi Middle Road, a street named after Urumqi, late on Nov. 26, according to online videos and attendees.

“Demand freedom!” People could be heard shouting in multiple videos, which were widely circulated on the county’s social media before being taken down.

“Xi Jinping,” a man chanted in a video. “Step down!” more followed.

“Communist Party,” some shouted; “Step down!” others responded. They repeated the chants while people could be seen holding blank white paper or recording the scene with their phones in the footage.

Eva Rammeloo, a reporter for Dutch newspaper Fidelity who was at the protest site, said she has “never seen anything like this” in the 10 years of her reporting in China. She estimated that there were more than 1,000 protesters in the early morning on Nov. 27.

Police began to arrest protesters. Some protesters could be heard shouting: “Don’t use violence!” A man said to the police: “You are people’s police, you should serve the people!”

Rammeloo asked a police officer if he agreed with the protesters.

“He smiled with a very long silence. ‘We can’t do anything about it. Mei banfa,’” Rammeloo wrote on Twitter.

Wulumuqi Middle Road has been barricaded, but there are protests along the road, according to Rammeloo.

This type of nationwide display of anger hasn’t been seen in China for decades. The CCP has relentlessly suppressed critical voices, especially during the pandemic. Several citizen journalists and residents trying to document the toll of the early days of COVID-19 were jailed.

Since the first COVID-19 outbreak was reported in Wuhan, the Chinese regime has countered the virus with harsh social control measures in an effort to eliminate every infection among communities. Snap lockdowns, repeated testings, mass surveillance, and mandatory quarantine of anyone they deemed at risk are among the methods that CCP officials have taken to implement their “zero-COVID” policy.

Three years later, many had expected the communist regime would pivot away from the harsh approach that deprived income from locked-down residents and caused countless tragedies involving non-COVID patients because of delayed medical care.

“No one likes the CCP or Xi Jinping,” a Shanghai resident surnamed Wang told The Epoch Times. He added that Chinese people are “fed up” over the draconian zero-COVID policies.

“All sectors are suffering. We need to feed ourselves, to support our family. With no income, how could we survive?” the man said in a phone interview on Nov. 27.

The authorities have blocked accounts that spread videos about the weekend’s protests, another Shanghai resident told The Epoch Times.

At Beijing’s prestigious Tsinghua University, dozens of people held a peaceful protest against COVID restrictions, during which they sang the CCP’s anthem, according to images and videos posted on social media.

In one video, a Tsinghua university student called on a cheering crowd to speak out.

“If we don’t dare to speak out because we are scared of being smeared, our people will be disappointed in us. As a Tsinghua university student, I will regret it for all my life.” The Epoch Times couldn’t immediately verify the video.

Despite the simmering public anger, People’s Daily, the CCP’s flagship newspaper, once again called on the country to stick to the zero-COVID policy.

The zero-COVID approach, which has now become a signature policy for Xi, should be understood as a political campaign for the CCP, according to Rory Truex, an assistant professor of politics and international affairs at Princeton University.

Yet the nationwide discontent and harsh approach appeared to pose the biggest challenge for Xi. Last month, Xi awarded himself the record-breaking third term in office during the 20th Party Congress. Installing his allies in the Party’s top decision-making bodies, Xi is now the country’s most powerful leader since the first ruler, Mao Zedong.

Feng Chongyi, a professor of China studies at the University of Technology Sydney, views the protests as a turning point in China’s politics.

“Major political changes in China require a three-step process, from civil uprisings to mutinies to coups. If the police do not want to suppress the people, their seniors will force them to suppress people or even send police from other places to suppress protestors, which may cause a mutiny. This has caused a nationwide chain reaction, and the tyranny of the CCP may end in this way.”