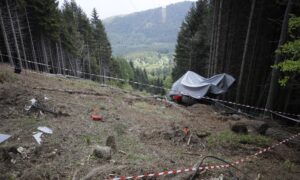 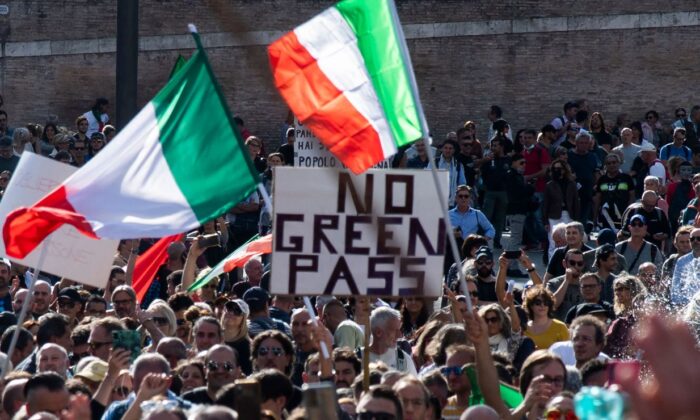 People wave national flags during a protest against the mandatory "green pass" in Rome, Italy on Oct. 9, 2021. (TIZIANA FABI/AFP via Getty Images)
Europe

Thousands of demonstrators marched in Rome and other Italian cities over the weekend to protest against the government’s COVID-19 vaccine mandate—one of the strictest in the world.

Starting on Oct. 15, the country’s “green pass” vaccine requirement will apply to private and public sector workplaces, with both employers and employees risking significant fines if they don’t comply. The vaccine passport is already required before entering restaurants, gyms, theaters, and other establishments as well as domestic flights, bus travel, or long-distance train travel.

Some protesters clashed with police as they marched toward Italian Prime Minister Mario Draghi’s office. Police responded by deploying water cannons and tear gas. A group tried to break through police lines to get to Draghi’s office, according to footage and pictures taken at the event, although footage also showed police swinging batons at the demonstrators.

Draghi denounced the protesters who clashed with police and said his broad unity government remains committed to completing its vaccination campaign.

“The right to demonstrate to support one’s ideas can never degenerate into acts of aggression and intimidation,” he said in a statement issued by his office.

A similar statement was issued by CGIL, one of Italy’s largest unions, after demonstrators marched on the organization’s offices on Oct. 9.

“If someone has thought of intimidating us, of frightening us, of making us shut up, they must know that … they don’t scare us,” CGIL head Maurizio Landini said in a translated statement, according to ANSA.

At least 12 people were arrested after the demonstrations, officials told ANSA. About 38 police officers suffered what appear to be mostly minor injuries, they said, although one officer suffered broken ribs.

Opponents of the Green Pass say it tramples on freedoms and is an indirect way of forcing vaccinations on people. Elsewhere, critics of vaccine passports have said that such systems would create a segregated, two-tiered society of the vaccinated and unvaccinated.

“Lengthen the minimum term of the Green Pass from 48 to 72 hours,” wrote Salvini in a Twitter post, calling it a step to “avoid chaos.”

Elsewhere in Europe, protesters in France have demonstrated every weekend for several months against the country’s vaccine mandate, which forces restaurants, gyms, some travel systems, and theaters to ask customers for proof of vaccination before entering. More took to the streets on Oct. 9 in Paris and other cities.