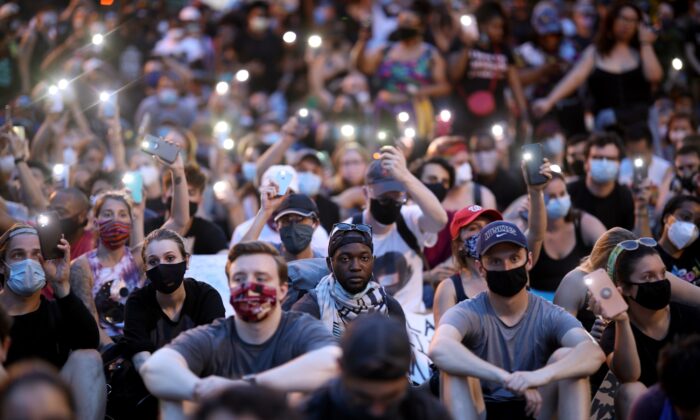 Demonstrators sing "Lean On Me" during a protest near the White House White House in Washington on June 3, 2020. (Win McNamee/Getty Images)
US News

Violent rioting and looting have eased across the nation, with demonstrations appearing largely peaceful because of the presence of federal law enforcement, according to acting Department of Homeland Security (DHS) Secretary Chad Wolf.

The administration’s response, ensuring state governors and local mayors had the law enforcement necessary to maintain peace and order, has worked, Wolf said.

“Over the last several days, we’ve seen that violent protest and that violent looting and rioting diminish,” he told Fox News’ Chris Wallace on June 7. “It’s not by happenstance and it’s not by chance. It’s because we took early action.”

What started as peaceful protests over the May 25 death of George Floyd in police custody has been exploited, according to the Department of Justice. While most have peacefully demonstrated, Attorney General William Barr said recently the DOJ had evidence the protests had been “hijacked” by Antifa and other similar groups.

Wolf said: “Can you imagine [what would have happened] if we had not done anything, if we had not increased our police presence in the D.C. area and in cities across the country?

Protests in Washington on June 6 were almost completely peaceful, Wolf noted, with “almost no arrests.” He also said the option to use active-duty forces in a law enforcement role “should only be used as a matter of last resort.”

Earlier this month, President Donald Trump and Barr held a conference call with the nation’s governors, telling them to crack down on the violence and to activate the National Guard if needed. The government, meanwhile, has made 51 arrests for federal crimes in connection with the rioting.

The point behind the call was to alert governors to the importance of having enough “adequate forces at hand” so as to ensure events could be controlled after “the most violent day in Washington in 30 years,” Barr said in a June 7 interview on CBS News’ “Face the Nation.”

“It’s more dangerous for everybody if you have these wild melees with thinly manned police lines running after protesters with batons … it’s important that adequate forces [are] on the street,” he said.

Barr also said it was “completely false” that the president demanded 10,000 active-duty troops be ordered onto American streets and that Trump officials agreed that the use of troops would be a “last resort.”

“I felt, and the secretary of defense felt, we had adequate resources and wouldn’t need to use federal troops,” he said. “But in case we did, we wanted them nearby.”

Officials from both sides say that outside groups have exploited the recent protests to further their own agenda. Police departments in several states have also warned of materials being purposely planted in certain locations so as to fuel rioting.

After the violence appeared to have slowed in recent days, the president announced in the early morning on June 7 that he had just ordered the National Guard “to start the process of withdrawing from Washington.” He said the situation now seems like “everything is under perfect control.”

“They will be going home, but can quickly return, if needed,” the president wrote on Twitter, referring to the National Guard. “Far fewer protesters showed up last night than anticipated!”

In a sign that the violence is diminishing, New York City lifted its 8 p.m. curfew, which had been put in place in response to riots and looting, a day early, Mayor Bill de Blasio announced on June 7. There were about 40 arrests citywide on June 5—far fewer than on previous nights—and no obvious signs of the smash-and-grab stealing that marred previous protests.

At a June 4 briefing, FBI Director Christopher Wray said the agency has “quite a number of ongoing investigations” against “violent anarchists extremists,” including what he described as “those motivated by Antifa, or an Antifa-like ideology.”

“We categorize and treat those as domestic terrorism investigations and are actively pursuing them through our joint terrorism task forces,” he said. “What tactics they use varies widely—sometimes from city to city, sometimes even from night to night.”