People waving American flags expressing support for President Donald Trump have broken through barriers and overwhelmed Capitol police, crowding inside the Capitol building, where both chambers were deliberating over objections to the electoral votes from the presidential election.

The deliberations have been put on hold and lawmakers have been evacuated. Shots have been reported inside the building, Epoch Times reporter Charlotte Cuthbertson wrote on Twitter. The building was put on lockdown.

Multiple videos from the site showed protesters getting into scuffles with police officers guarding the barrier outside. A mass of people at the tip of a crowd of perhaps 200,000 Trump supporters marching on the Capitol then pushed their way through the barriers and police. Reinforcements were seen rushing in, reportedly shooting teargas into the crowd. The crowd broke into the building and more people gathered at the steps outside.

The National Guard has been called to the Capitol, Politico reported.

Trump called on his supporters to remain peaceful and to stand by the Capitol Police.

“Please support our Capitol Police and Law Enforcement,” he wrote on Twitter. “They are truly on the side of our Country. Stay peaceful!”

Some reporters are still inside the chambers. 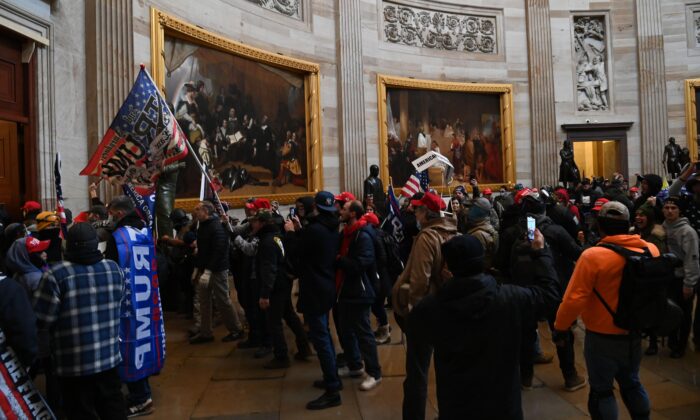