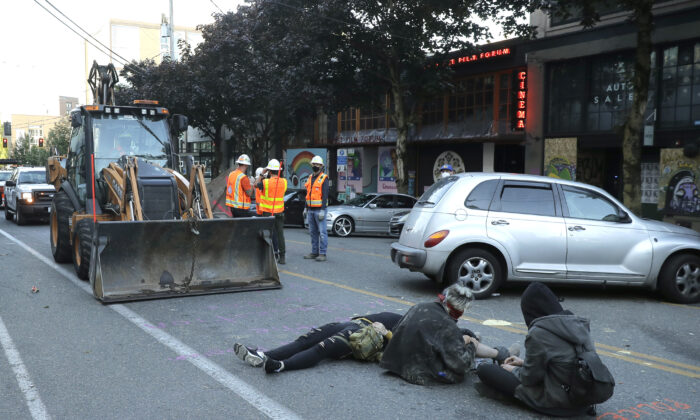 Protesters lie down and sit in the street after workers and heavy equipment from the Seattle Department of Transportation arrived at the the CHOP (Capitol Hill Occupied Protest) zone in Seattle, Wash., on June 26, 2020. (Ted S. Warren/AP Photo)
US News

Employees from multiple departments arrived outside the zone early June 26 “to continue the recovery of the Capitol Hill neighborhood, with the goal of removing some additional barriers blocking the roadways and cleaning up Cal Anderson Park,” a city spokesperson told The Epoch Times in an emailed statement.

“Once this work commenced to remove some of the barriers blocking roadways, City workers were met with significant resistance by protesters, who grew increasingly agitated and aggressive towards City workers.”

Protesters are refusing to leave until their demands are met. The demands include abolishing the Seattle Police Department, reparations for “victims of police brutality,” and a retrial of all minorities currently in prison for violent crimes.

Plans are being made on how to safely transition the area, known as the Capitol Hill Organized Protest (CHOP), from the occupation to normal operations.

Durkan, a Democrat, announced June 22 the city would dismantle the zone after a steady increase in violence, including a fatal shooting. She had previously expressed support for the occupation, claiming it could lead to a “summer of love.”

The zone includes an abandoned Seattle Police Department precinct. After police left the building on June 8, protesters streamed into the area, moving barricades across city streets and blocking traffic.

Officials were supposed to publicly outline plans to dismantle the zone by June 27 or lawyers representing the plaintiffs would file a court order, but the lawyers agreed not to file the order, the Seattle City Attorney’s office said.

The continued standoff led to Durkan meeting with CHOP organizers late on June 26; she didn’t speak to reporters afterward.

Durkan met with organizers “to discuss the restoration of the Capitol Hill area and long-term changes to transform policing,” the mayor’s office said in a statement after the meeting.

“The City’s goal remains to allow any individuals to exceed use their first amendment rights while also preserving the public safety of local residents and small businesses. The Mayor suggested a series of steps that she believes can be taken in the coming days, including the removal of the barriers to create more access. She also believes in the planning for some of the long term changes to Cal Anderson including art installations and the community garden,” according to the statement.