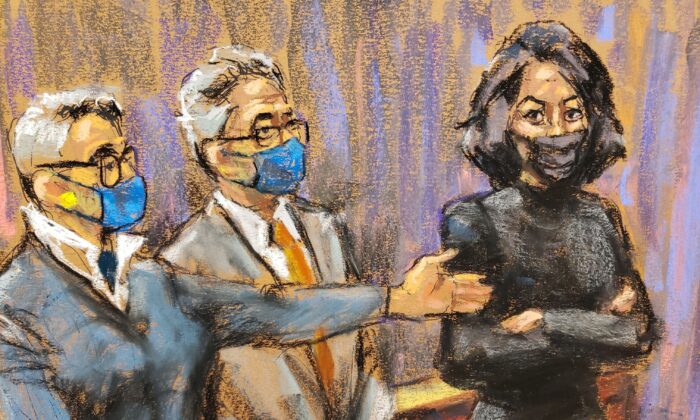 NEW YORK—The prosecutors in the case against Jeffrey Eppstein associate Ghislaine Maxwell on June 26 dismissed claims raised by the defendant’s attorneys, who told the judge that Maxwell was unable to access her legal documents because she had been placed on suicide watch.

In a June 25 letter to Judge Alison Nathan from Bobbi Sternheim, one of Ghislaine Maxwell’s defense attorneys, Sternheim informed the court that Maxwell was placed on suicide watch on June 24 by the Manhattan Detention Center (MDC), which in turn could cause a delay in Maxwell’s sentencing, scheduled for this Tuesday.

She states this was done “without having conducted a psychological evaluation and without justification.”

The attorney goes on to say, “Ms. Maxwell was abruptly removed from general population and returned to solitary confinement, this time without any clothing, toothpaste, soap, legal papers, etc. She was provided a ′suicide smock′ and is given a few sheets of toilet paper on request. This morning a psychologist evaluated Ms. Maxwell and determined she is not suicidal.”

The prosecution investigated the allegations and came to a different conclusion.

In a letter to Nathan dated June 26, the prosecution wrote, “This morning, the Government spoke directly with the Warden and the Chief Psychologists of the MDC. Based on that conversation, the Government understands that the defendant currently has access to all of her legal documents in hard copy and is able to confer with defense counsel. Accordingly, there is no basis to adjourn sentencing in this matter.”

The letter confirms Maxwell was indeed placed on suicide watch, after the Bureau of Prisons Inspector General’s Office (the IG) had received an email from Maxwell claiming to be in fear for her safety, specifically from members of the MDC staff.

However, it goes on to say, “Although the defendant has claimed to psychology staff that she is not suicidal, she has refused to answer psychology staff’s questions regarding the threat she reported to the IG.

“While she claimed to the IG to be in fear for her safety, she refused to tell the psychology staff what that fear is.”

The prosecution claims the warden and the chief psychologist have confirmed that Maxwell “will be able to prepare for sentencing unencumbered.”

Additionally, the prosecution claims the MDC staff “gathered all the papers within the defendant’s property, including bins of papers, and put them all in her cell on suicide watch,” thus giving Maxwell access to what she needs.

The prosecution claims Maxwell has access to her lawyers either in person or by phone and is no longer needed to wear a smock.

The letter ends with the conclusion that the sentencing should proceed as scheduled.

Maxwell was found guilty of five of six counts of sex trafficking in connection with Jeffrey Epstein on Dec. 29, after a month-long trial in federal court in New York.