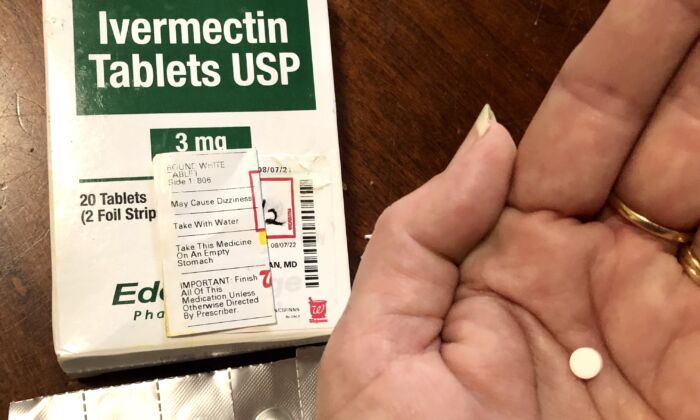 The Food and Drug Administration has warned against taking ivermectin for COVID-19, because it is "horse medication." However, ivermectin packaged for human use (as shown here) has been widely prescribed for decades for a range of maladies, including for treatment of lice, other parasites, and viruses. (Nanette Holt/The Epoch Times)
AMERICA

Lawmakers in Iowa’s state Legislature have advanced a measure that would allow the use of ivermectin for critically sick COVID-19 patients.

Ivermectin has been used for decades to treat parasitic worms in humans, but during the COVID-19 pandemic, some patients and doctors have attested that the drug is effective in relieving symptoms of the disease.

The Iowa measure stipulates that COVID-19 patients who are on ventilators should have the option to use ivermectin. Specifically, it expands the state’s “right to try” law, which allows terminally ill patients to access medicines that have been approved under the first phase of the Food and Drug Administration’s (FDA) trials.

“I completely support it. I think that we should give patients the right to try,” Rep. Ann Meyer, a Republican and one of the measure’s co-sponsors, told the Des Moines Register in late January.

Rep. Lee Hein, also a Republican, said he sponsored the measure after hearing that two families of critically ill COVID-19 patients had sought ivermectin, but hospital policies prevented them from obtaining the medication. Both patients died of COVID-19, according to Hein.

“I don’t know whether any of these drugs work, but I think at that late stage in the game, once you’re on a ventilator, families ought to have at least a glimmer of hope to try something,” he told Radio Iowa.

The FDA’s website states that its “currently available data” suggest that the medication isn’t effective at treating or preventing COVID-19. However, the agency courted controversy in 2021 when it issued a Twitter post suggesting that the drug is only used for “deworming” horses and other livestock, although it has long authorized ivermectin tablets as a treatment for worms in humans.

The FDA and other agencies have warned against people taking livestock-grade ivermectin, which doesn’t require a prescription, amid reports of increases in people being admitted to hospitals after taking the livestock version of the drug.

The drug gained more attention after podcaster Joe Rogan confirmed that he took human-grade ivermectin in a bid to curb his COVID-19 symptoms. Ivermectin is also being used across Latin America for COVID-19, including in Peru, Guatemala, Bolivia, and other countries.

In December 2021, the family of an Illinois man, Sun Ng, who developed severe COVID-19 symptoms and was near death, said he recovered after taking ivermectin. It came after a court ordered the hospital to administer the drug to Ng, the family’s attorney told The Epoch Times at the time.

Meyer, who’s also a nurse, said ivermectin has “been around” for “many years.” The legislation would allow “off-label” use of the drug for COVID-19 patients who are on life support in hospitals, she told Radio Iowa.

Republicans advanced the measure through a subcommittee meeting on Jan. 26. One Democrat on the subcommittee, Rep. Mary Mascher, voted against advancing the measure.

“There’s a lot of folks in the room who are medical folks,” Mascher said during last week’s hearing. “And I have heard no one in support of the bill.”