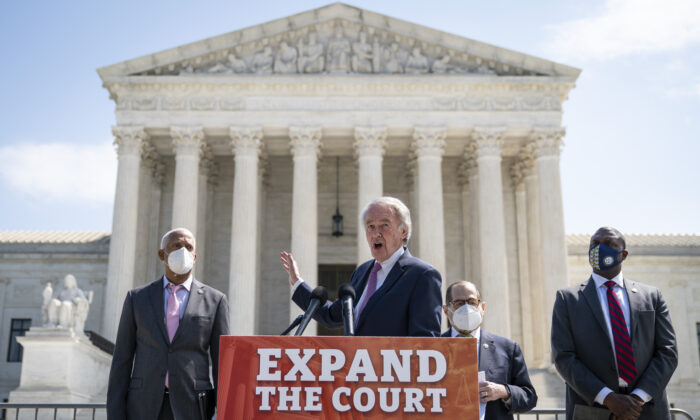 “The White House Commission on the Supreme Court ‘draft’ misses the mark. After years of Republicans upending precedent, breaking their own rules, and stealing seats on the Supreme Court, we must restore legitimacy and integrity to the Court and undo the damage Donald Trump and Mitch McConnell have inflicted on our democracy,” said the lawmakers in a press statement.

The initial report put out by the PCSCUS Thursday said the group was divided on adding whether to add more Supreme Court justices, taking it from 9 to 13 on the bench.

“As a legal matter, we conclude that Congress has broad power to structure the Supreme Court by expanding (or contracting) the number of Justices,” a readout of the commission’s draft discussion materials stated. “The prudential question is more difficult, and Commissioners are divided on whether Court expansion would be wise.”

“Meanwhile, even some Democratic critics of the court oppose expansion, warning that any attempt to expand the court or otherwise alter its structure would threaten the independence of the court and its role in the constitutional system,” the commission wrote.

White House Press Secretary Jen Psaki told reporters at a press briefing Wednesday that the president would not comment until after the commission submitted its final report.

“Their release will be followed by a public meeting of the commission on Friday, they will then form their final report and submit it to the president in mid-November,” said Psaki. “We’re not going to comment on it—or the president wouldn’t comment on it—until a report is final and he has the chance to review it.”

Currently, the Supreme Court is made up of three liberal and six conservative justices, the last three of whom were appointed by President Donald Trump. Since the last appointment of justice Amy Coney Barrett in 2020, progressives like Senate Majority Leader Chuck Schumer (D-N.Y.) have been calling for adding justices to guarantee that laws that Democrats enact will not be overturned by the court.

“The GOP’s rigged bench is contorting our laws and issuing decisions that do not reflect, understand, or serve the people the Court is meant to represent,” wrote the progressive lawmakers. “Voting rights, abortion rights, immigration rights, LGBTQ+ rights, and women’s rights are all at stake. We need more than the Commission’s report. We must pass legislation to expand the Supreme Court.”

Republicans, meanwhile, have been critical of any change to the Supreme Court, especially increasing the number of justices.

Ranking Member of the Senate Judiciary Committee Chuck Grassley (R-Iowa) said Democrats are looking for an excuse to add justices to the court to enact their agenda.

“Some Democrats have said the court needs to, quote-unquote, heal itself before the public demands that the court is restructured in order to reduce the influence of politics,” said Grassley during a hearing on the Supreme Courts’ emergency docket. “That’s a fancy way of saying that if the rulings don’t change, they’ll try to pack the court. This campaign against the court and against individual justices has hurt the public.”

Sen. Josh Hawley (R-Mo.), who has been an outspoken critic of progressive policies coming from the Biden administration, voiced his objection to the effort.

“Not even Joe Biden’s “commission” will endorse Court-packing. Americans are against it. And yet the Left continues to demand it – another example of their agenda to bend our democracy to their political gain,” Hawley said in a social media statement on Friday.