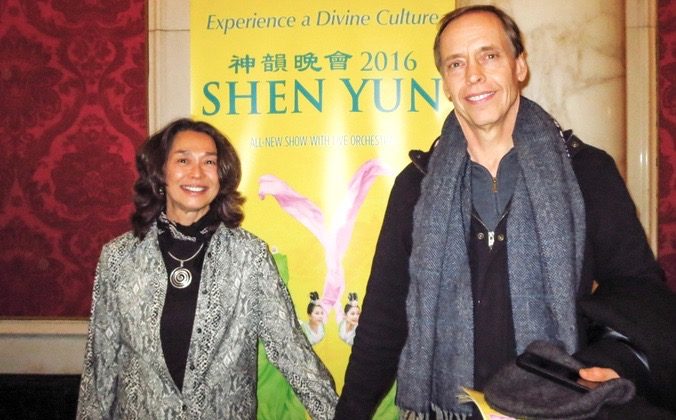 BOSTON—Ann Klein, a software trainer, said the Shen Yun Performing Arts performance she attended at the Boston Opera House on Jan. 23 was thrilling to the senses.

“The colors and the artistry … it was really one of a kind,” Ms. Klein said.

Shen Yun is a New York-based classical Chinese dance group that is reviving traditional Chinese culture. Each dance is accompanied by a live orchestra comprised of Eastern and Western instruments.

The performances are also enhanced by an interactive digital backdrop that whisks the audience away to cloud-laden Himalayan peaks and ancient Chinese cities.

“It was beautiful. It was just absolutely gorgeous and beautiful,” Ms. Klein said. “Absolutely anyone should see that.”

Some of the dances are story-based, which convey narratives from ancient Chinese folktales and literature.

David Morgan, a computer programmer who attended the performance with Ms. Klein, said he appreciated the spiritual aspect of Chinese culture.

“I enjoyed being here,” Mr. Morgan said. “It goes along with my values as far as trying to figure what’s the important things in life…what we’re here for—it’s not all about money.”

“Why are we on earth? What brought us here? Why are we here? What is our real purpose in life?” Mr. Morgan said. “Trying to figure that out instead of just being part of the rat race, right? Just trying to appreciate what nature brings and try to be fair to everyone.”

At Shen Yun, Ms. Klein learned about the persecution of Falun Gong, a spiritual meditation practice based on truthfulness, compassion, and tolerance.

“It’s surprising to see how the people are still being oppressed by the communist regime,” she said. “That was eye-opening. It was very interesting.”