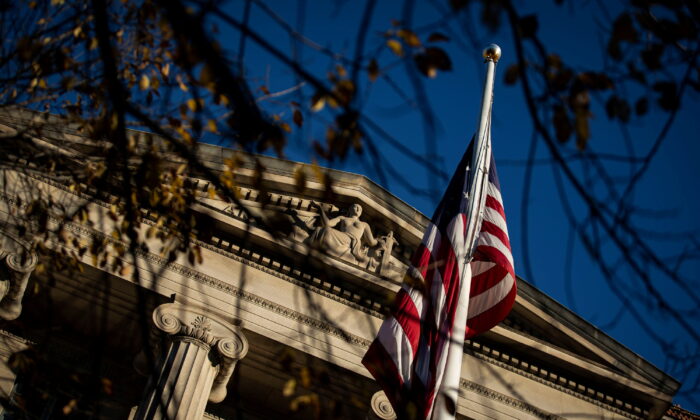 An American flag waves outside the U.S. Department of Justice Building in Washington, on Dec. 15, 2020. (Al Drago/Reuters)
By Mary Hong

Zhengdong Cheng, a Texas A&M professor and NASA researcher, pleaded guilty to charges related to lying about his connections to China. Cheng was arrested and charged with conspiracy, making false statements, and wire fraud in 2020.

According to an FBI’s Twitter post on Sept. 23, Cheng pleaded guilty to lying to Texas A&M University (TAMU) about his affiliations with Chinese entities to violate his agreements with NASA.

A federal judge in Houston accepted a plea deal. As part of the deal, Cheng agreed to pay $86,876 in restitution to NASA and a $20,000 fine. Court documents show Cheng and prosecutors agreed that the 13 months he already spent in jail is “an appropriate sentence in the matter,” the KBTX reported.

The arrest and charge of Cheng was part of the China Initiative effort, led by the National Security Division (NSD) of the U.S. Department of Justice, for countering nation-state threats to the United States.

The department announced the China Initiative in 2018 during the Trump administration to combat Beijing’s relentless security threats by identifying and prosecuting those engaged in trade secret theft, hacking, and economic espionage.

According to the NPR report, the initiative was controversial for causing “much criticism from civil rights groups that say it created a climate of fear among Asian Americans.”

After a review of the initiative, the Biden administration scrapped it in February.

In fact, the scale of Beijing’s efforts to steal U.S. secrets, technology, and research is staggering.

The Justice Department will continue to combat Chinese espionage and cyberthreats, just without the China Initiative banner, according to the head of the National Security Division, Assistant Attorney General Matthew Olsen, NPR reported.

He also said the department needed to be responsive to concerns raised by civil rights groups, academics, and scientists about what they say were negative ripple effects caused by the China Initiative, according to the NPR.

Cheng is accused of hiding his affiliation with Chinese State-owned academic and commercial institutions, such as the Guangdong University of Technology, along with other foreign universities, while disregarding the rules established under his NASA contract during his employment at TAMU, said an FBI Twitter post on Aug. 25, 2020, when Cheng was arrested.

Cheng was fired from Texas A&M shortly after his arrest.

“Texas A&M and the Texas A&M System take security very seriously, and we constantly are on the look-out for vulnerabilities, especially when national security is involved,” said John Sharp, chancellor of the Texas A&M System. “We will continue to work with our federal partners to keep our intellectual property secure and out of the hands of foreign governments who seek to do us harm,” stated the TAMU News Release.

The FBI prioritizes investigating threats to academia as part of the commitment to preventing intellectual property theft at U.S. research institutions and companies, according to an FBI Twitter post on Sept. 23, “We faithfully protect the integrity of federally funded research and prevent the loss of billions of dollars from the American economy by collaborating with all community, private, and public sector partners, such as Texas A&M University.”