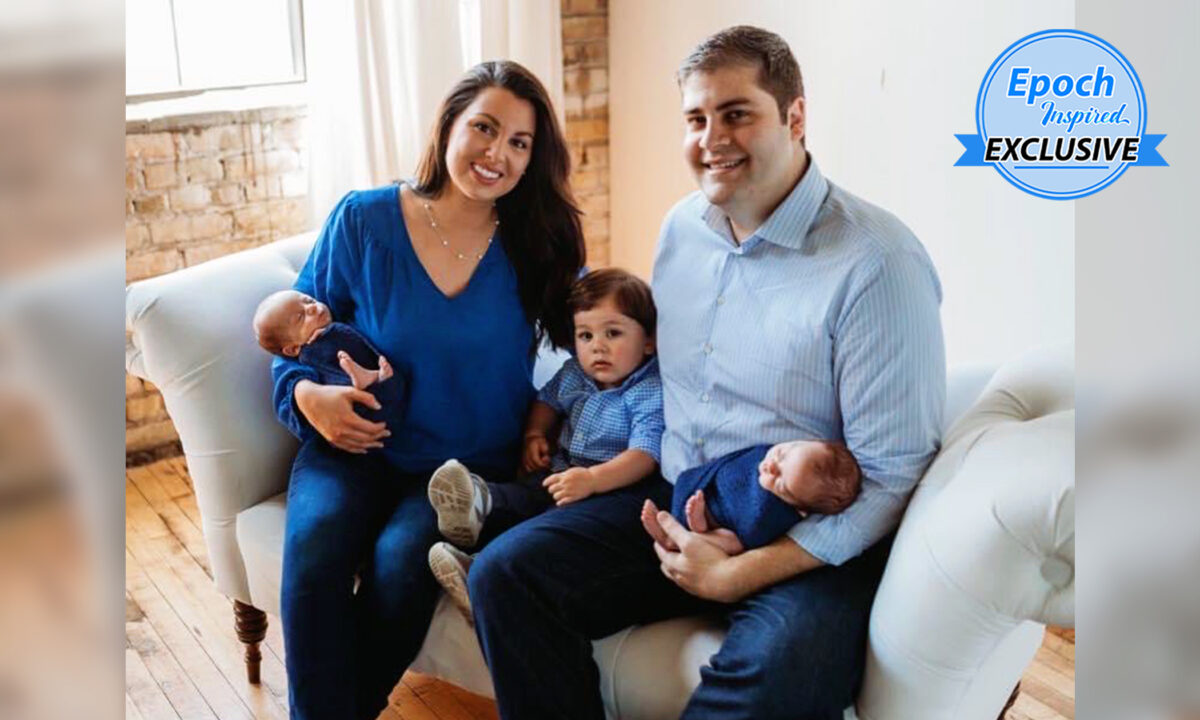 Minnesota State Senator Julia Coleman, 29, a proud mom of three sons, had to navigate complications during her second pregnancy with identical twin boys.

Doctors advised she abort one baby to better the survival odds of the other. But Coleman and her husband, Jacob, leaned on their faith and refused—a decision Coleman says made her family stronger.

“We had to fight for each day they were allowed to continue to grow, leading up to their birth,” Coleman told The Epoch Times in an email interview. “We got through and have nerves of steel as a result.”

Coleman and her husband found out they were expecting shortly before her election to the state senate. At 16 weeks, they learned they were having identical twin boys.

However, their joy was chased by heartache when doctors diagnosed Twin-to-Twin Transfusion Syndrome (TTTS); baby Charles was also facing Selective Intrauterine Growth Restriction (SIUGR). Both conditions occur when the placenta is shared between the twins: the TTTS results in an imbalance in the net flow of blood between the twins, while SIUGR results in suboptimal growth in one of the twins due to the unequally shared placenta.

The couple was suggested “selective reduction,” the termination of one baby, as a solution.

“Without even having to consult the other, we both instantly shook our heads, ‘No,’ and said that wasn’t an option for us,” Coleman said. “We weren’t going to choose between our sons.

“We are pro-life Catholics, so abortion is never an option for us. Even if we weren’t Catholic, we could never choose to end the life of another human.”

Coleman and her husband placed their faith in God, wishing to set an example for their toddler son, Adam.

“This, more than any other experience in my life, required me to understand I had zero control over the situation and had to give everything to God,” she said. “When you give everything over to God, it’s easier to keep going and remain strong. When we would feel desperate, down, or diminished, we would first turn to prayer.”

The Colemans measured their babies’ progress day by day. Miraculously, the twins’ TTTS resolved without surgery, but they were still worried for baby Charles. Starting at 24 weeks, Coleman went into on-off preterm labor. She said she needed two rounds of steroid shots to prepare her babies’ lungs for birth, and a round of magnesium to prevent their brains from bleeding.

Coleman had been hoping to reach the mark of 33 weeks in order to better her babies’ chances of survival. On May 17, at 33 weeks pregnant, Coleman ended a legislative session at midnight and delivered her babies by C-section at midday on May 18.

“We didn’t know if they’d make it; we were especially concerned for Charles,” Coleman said. “Jacob was armed with a bottle of holy water, prepared to baptize them if need be.”

Charles Norman, born first, “took a big breath and immediately cried out as if to say, ‘I’m here, Mommy! I made it!'” Coleman said. James Brad followed two minutes later and did the same.

Yet their struggle persisted for 27 days at the NICU of Children’s Minnesota Hospital.

“The NICU experience isn’t one I’d wish upon my worst enemy,” Coleman said. “There were times where I’d be holding the babies, and due to their prematurity, they would stop breathing in my arms. You have to ask permission to hold your babies. They are constantly being poked and prodded.

“Going home at the end of the day without your babies is probably the most gut-wrenching thing any parent has to do. But we got through and have nerves of steel as a result.”

Coleman recalled that bringing James home was hard, as Charles was still left behind. But the feisty newborn “made giant leaps in progression” and followed his twin home just days later to meet proud big brother, Adam.

“The first night at home with my entire family together was one of the happiest days of my life,” she said.

Three months on, Coleman says the twins are doing “fantastic.” While Charles is still smaller, he is “quickly catching up.”

“Our oldest son, Adam, absolutely loves being a big brother and tries his best to help out as much as a 22-month-old can,” she said.

“We refer to James as ‘Pooh Bear’ because that’s exactly how he acts. He’s a big, soft, sleepy teddy bear,” Coleman said. “Charles is our feisty one, probably because he has had to fight for his life since conception.”

As her babies grow, Coleman balances life as a mom and as an active state senator serving Minnesota’s District 47.

Coleman explained to The Epoch Times that the more she meets mothers pregnant with multiples, the more she has learned that selective reduction is being “frequently pushed on mothers, especially mothers of triplets.”

Advising other struggling couples to hold firm to their faith, she said she can’t imagine one of her twins without the other.

“They are so connected,” she said. “Life is beautiful, God will have your back. Please have faith and choose life.”