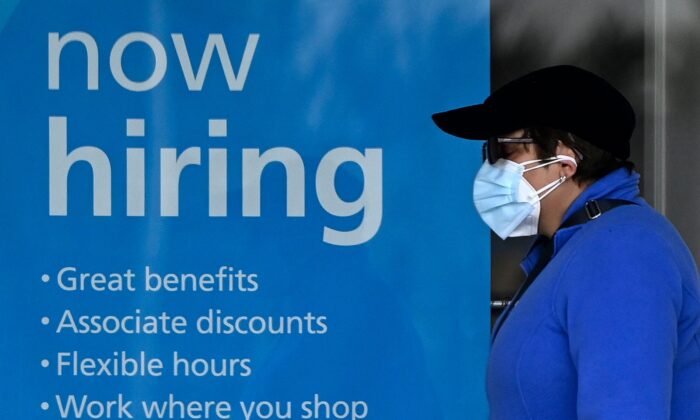 A woman wearing a face mask walks past a “now hiring” sign in front of a store in Arlington, Va., on Jan. 13, 2022. (Olivier Douliery/AFP via Getty Images)
Economy

The pace of job growth among America’s private employers slowed sharply in April while small business hiring dipped into negative territory, according to payroll processor ADP, with the numbers painting a picture of a labor market recovery losing steam.

Private-sector employment in the United States grew by 247,000 positions in April, according to ADP’s May 4 report, well below market forecasts of 395,000 and a big drop from March’s 479,000 positions.

The U.S. unemployment rate currently sits at 3.6 percent, a level economists generally consider to be close to full employment, with the rate never going to zero as there are always some active job-seekers who are between jobs.

While big business hiring was relatively strong with 321,000 jobs added in April compared to 177,000 in March, the soft patch in the data was in the small business sector.

Employment at midsized companies—ones with between 50 and 499 employees—rose by 188,000 jobs last month.

The ADP jobs report comes on the heels of Labor Department data showing that a record number of U.S. workers quit their jobs as of the last business day in March while the number of job openings climbed to an all-time high.

The Labor Department data also showed that there were nearly twice as many job openings as there were unemployed people, with employers continuing to face difficulties hiring workers, boosting wages to attract and retain staff.

“The employment situation should give workers continued confidence, but poses challenges for managers and businesses,” Bankrate Senior Economic Analyst Mark Hamrick told The Epoch Times in an emailed statement.

Difficulty finding qualified workers continues to be a major challenge for America’s small businesses. A recent report from the National Federation of Independent Business (NFIB) showed that nearly half of small business owners raised compensation in March to attract talent.

“The labor shortage has not eased on Main Street as the number of job openings exceeds the number of unemployed workers,” Bill Dunkelberg, NFIB Chief Economist, said in a statement.

“Owners have continued to increase their compensation in March to attract the right employees for their open positions, however, these rising labor costs will be passed on to their consumers through higher selling prices,” he added.

The NFIB report showed that nearly a quarter of small business owners cited labor quality as their top business problem, in second place behind inflation.

Surging costs were the top business problem identified by small business owners in a recent Bank of America survey (pdf).

Small business owners have also grown more pessimistic about the national economy than they were at the height of the pandemic in 2020, the survey showed.

Analysts are now turning their attention to the Labor Department’s closely-watched nonfarm payrolls employment report, due for release on May 6, which will show how many jobs were created in the U.S. economy last month, both by government and private employers.

Consensus forecasts put that number at 400,000, which would mark a slight drop over the prior month’s 431,000 new positions.

“Jobs creation, or hiring, should be on par with the previous solid reading and the unemployment rate could slip to match the pre-pandemic low of 3.5 percent,” Hamrick predicted.

“Wage growth should be solid, but insufficient to stay ahead of rising consumer prices,” he added.