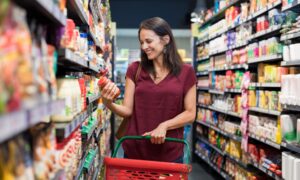 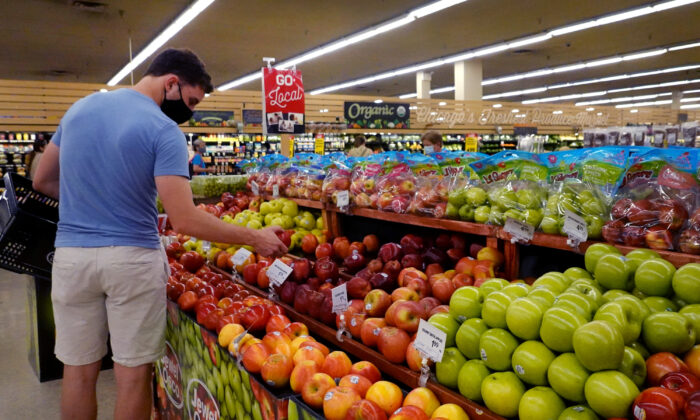 Customers shop for produce at a supermarket on June 10, 2021 in Chicago, Ill. (Scott Olson/Getty Images)
Economy

WASHINGTON—U.S. inflation in May rose 5 percent from a year ago, recording the biggest annual spike since 2008 as supply bottlenecks and surging household demand continue to push prices higher.

While transitory factors continue to lift prices, the economy sees more signs of continuing inflationary pressures, according to analysts, which may point to persistently high inflation.

The Labor Department announced that the consumer price index increased 0.6 percent in May on a monthly basis, just above the consensus forecast of 0.5 percent.

The rise in used car prices accounted for about a third of the increase in overall inflation. Prices for used cars and trucks jumped 7.3 percent in May, following a 10 percent increase in April, as global semiconductor shortages continue to affect new car production. This put “used car prices up at more than a 170 percent annualized pace over the past two months,” according to Morgan Stanley.

Food prices rose 0.4 percent and energy prices remained flat in May. Analysts, however, expect a further increase in food prices in the coming months.

Core inflation, which excludes the volatile food and energy components, is up 3.8 percent over the past year—the largest gain in 28 years.

The sharp jump in the year-over-year inflation number is partially due to the base effect, as the pandemic lockdowns and the plunging economy caused weak consumer inflation a year ago. The base effect is expected to level off in June.

In March, the central bank raised its inflation projection for 2021 to 2.4 percent, up from the 1.8 percent projected earlier. Fed officials have repeatedly said price increases are “transitory,” with the expectation that inflation will eventually return to the central bank’s 2 percent target.

Recent inflation data, however, may require the Fed to revisit its inflation forecasts.

“The outsized gains in a few select sectors support the Fed’s view that the current degree of price pressures is temporary,” Sarah House, senior economist at Wells Fargo Securities, wrote in a report. “However, we see signs of inflationary pressures broadening out, which we believe will keep monthly price gains from merely falling back to their pre-pandemic trend after the current flurry of activity.”

Restaurants and groceries have started to raise their prices as they face increasing food and labor costs. Agricultural commodity prices surged about 60 percent over the past year, reaching a decade high, according to Wells Fargo. And average hourly earnings at restaurants have increased 24.4 percent at an annualized rate in the past three months, as business owners scramble to fill open job positions.

“What was most notable in this report is that while transitory factors did a lot of the heavy lifting driving the May upside, the more persistent components like rents and OER [owner’s equivalent rent] firmed up as well much more than expected,” she wrote in a report.

OER, which is used to estimate shelter cost (a monthly rent that would be equivalent to the monthly expenses of owning a house), rose 0.31 percent in May, the largest increase since June 2019. And rents increased 0.24 percent, the largest since March 2020, according to Morgan Stanley.

Carson also noted that the current business cycle is “quite unusual.” Unlike previous recessions, unique features of this recovery cycle include low inventory levels and wage inflation, which are driving prices higher.

One of the world’s largest consumer goods corporations, Procter & Gamble, announced that it would raise prices for its baby, feminine, and adult care products.

David Taylor, CEO of Procter & Gamble, said at a virtual conference hosted by Fortune that inflation is “inevitable.”