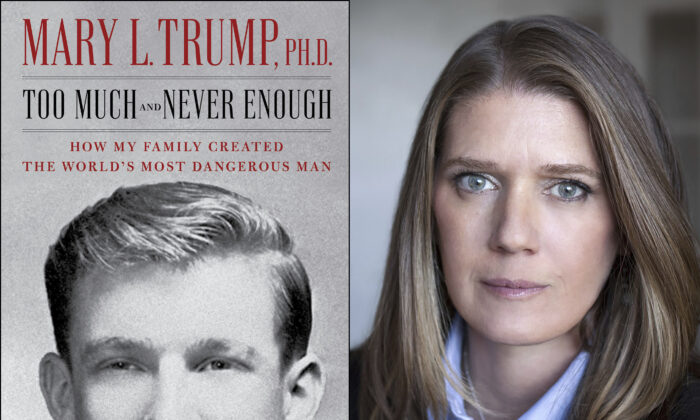 This combination photo shows the cover art for "Too Much and Never Enough: How My Family Created the World’s Most Dangerous Man", left, and a portrait of author Mary L. Trump, Ph.D. The book, written by the niece of President Donald J. Trump, was originally set for release on July 28, 2020, but will now arrive on July 14. (Simon & Schuster, left, and Peter Serling/Simon Schuster via AP)
US News

NEW YORK—Mary Trump can talk about the memoir she wrote about her uncle, President Donald Trump, after the president’s brother requested a judge cancel a temporary restraining order from June 30 on Monday, allowing the president’s only niece to freely publicize and distribute her work.

After Robert Trump’s request, Judge Hal B. Greenwald in Poughkeepsie, New York, reversed orders he had issued temporarily blocking Mary Trump from promoting her book. Robert Trump had filed an injunction in June seeking to block Mary Trump from publishing the memoir according to an agreement that relatives made barring anyone talking about family members publicly without others consent when settling the estate of her father after his death.

An appeals judge had already ruled on July 1 that the publisher of Trump’s niece’s memoir, Simon & Schuster, was not bound by the confidentiality agreement that she signed, allowing it to print and distribute the 240-page book, “Too Much and Never Enough: How My Family Created the World’s Most Dangerous Man,” which is scheduled to be released on July 14.

Bloomberg reported that more than 600,000 copies of the book have already been distributed to bookstores across the United States, but not yet released. Simon & Schuster Chief Executive Officer Jonathan Karp argued in an affidavit to the court on July 8 that the book was already widely available and that Robert Trump’s injunction “would have little impact at this point.”

The judge said the confidentiality clauses in the 2001 agreement “viewed in the context of the current Trump family circumstances in 2020, would ‘…offend public policy as a prior restraint on protected speech…'”

“Notwithstanding that the book has been published and distributed in great quantities, to enjoin Mary L. Trump at this juncture would be incorrect and serve no purpose. It would be moot,” the judge wrote.

Greenwald said the confidentiality agreement that settled multiple lawsuits mainly concerned the financial aspect of the deal, which isn’t as interesting now as it might have been two decades ago.

“On the other hand the non-confidential part of the agreement, the Trump family relationships may be more interesting now in 2020 with a Presidential election on the horizon,” the judge said.

According to the book’s description, it seeks to trace how family members were affected by the president’s father, a successful real estate owner, and provides Mary Trump’s insights on how the president may have developed some of the traits that he is known for in the White House.

The publisher describes Mary Trump as a trained clinical psychologist with a PhD from the Derner Institute of Advanced Psychological Studies.

The book was originally to be published at the end of July. The publisher announced last week it would be published Tuesday.

“The First Amendment forbids prior restraints because they are intolerable infringements on the right to participate in democracy. Tomorrow, the American public will be able to read Mary’s important words for themselves,” he said in a statement.

In a statement, Simon & Schuster said it was “delighted that the Court has denied the plaintiff’s request for preliminary injunction, and vacated the Temporary Restraining Order against our author, Mary L. Trump.”

It added: “The unfettered right to publish is a sacred American freedom and a founding principle of our republic, and we applaud the Court for affirming well-established precedents against prior restraint and pre-publication injunctions,” it added. “’TOO MUCH AND NEVER ENOUGH’ is a work of great significance, with very real implications for our national discourse, and we look forward to bringing it to a public that is clearly eager to read it.”

Messages seeking comment were left with an attorney for Robert Trump.

On the eve of its publication, Mary Trump’s book was ranked No. 1 on the Amazon.com list of best-selling books.

By Larry Neumeister. With additional reporting by Epoch Times staff.