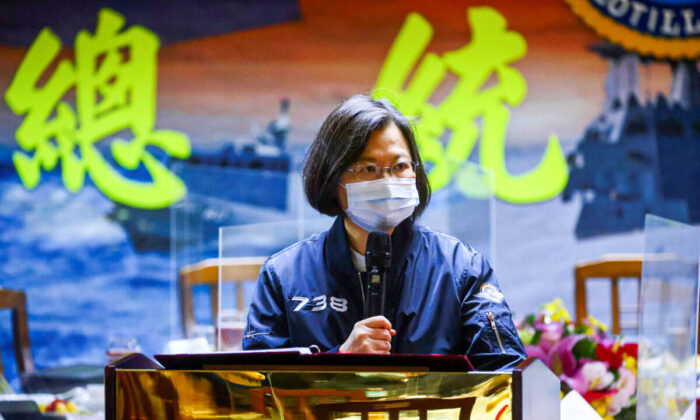 President Tsai Confirms Presence of US Troops on Taiwanese Soil

Taiwan President Tsai Ing-wen confirmed on Oct. 28 that for the first time in 40 years there are U.S. troops on Taiwanese soil, saying that she’s confident that the United States would defend the self-ruled island if it were attacked by China.

“I do have faith, given the long-term relationship that we have with the United States. and also the support of the people of the United States as well as the Congress,” she told CNN in an interview aired on Oct. 27. “The administration has been very helpful.”

The “threat from China is increasing every day,” Tsai stated, confirming that U.S. troops are currently stationed on the island. However, she said that there were “not as many as people thought” on Taiwanese soil.

“We have a wide range of cooperation with the United States aiming at increasing our defense capability,” she said.

The Chinese Communist Party (CCP) claims that the self-ruled island of Taiwan is a province of China. The democratically governed island has its own constitution, military, and ruling party.

Beijing has escalated military harassment against the island in recent weeks, including through a show of force from the Chinese military over Taiwan’s air defense zone.

Earlier this month, Chinese leader Xi Jinping renewed claims that Taiwan would be “reunified” with the mainland and blamed the continued commitment to Taiwan’s independence as a major threat to his plan of so-called national rejuvenation, a goal that observers say indicates Xi’s desire to transform the regime into the world’s sole superpower by mid-century.

“Here is this island of 23 million people trying hard every day to protect ourselves and protect our democracy and making sure that our people have the kind of freedom they deserve,” Tsai said. “If we fail, then that means people that believe in these values would doubt whether these are values that they [should] be fighting for.”

Tsai previously said the island will do “whatever it takes” to safeguard it against mounting CCP aggression.

Her latest remarks come a week after President Joe Biden told a CNN town hall event that the United States was committed to defending Taiwan if the self-ruled island were attacked by China—a departure from a long-held U.S. position of “strategic ambiguity.”

The White House later walked back his comments, while some analysts said Biden had simply misspoken. The president was “not intending to convey a change in policy, nor has he made a decision to change our policy,” White House press secretary Jen Psaki said on Oct. 22.

Biden and Xi are expected to hold a virtual meeting before the end of the year, according to White House national security adviser Jake Sullivan.