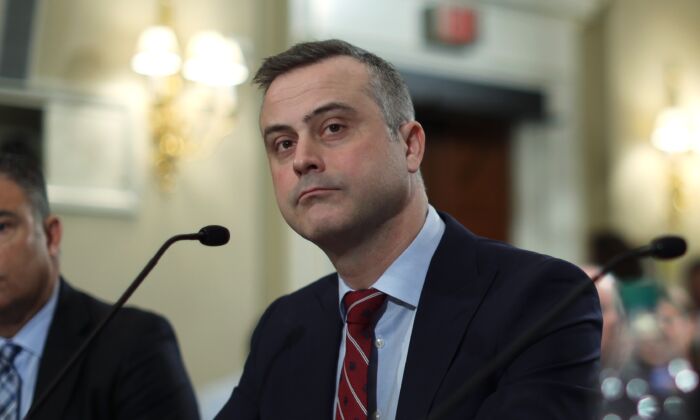 President and CEO of Dominion Voting Systems John Poulos testifies during a hearing before the House Administration Committee on Capitol Hill in Washington on Jan. 9, 2020. (Alex Wong/Getty Images)
Viewpoints

In other words, we’re asked to believe that Biden outperformed his former boss by 39.45 percent in Georgia, though Biden was soundly defeated in the 2008 Democratic primary by Obama, and that was when Obama’s sole political credentials were that of a Chicago community organizer and Illinois state senator, and before Biden’s obvious cognitive decline. Trump garnered 2,461,854 Georgia votes, and thus would have handily defeated Biden’s former boss.

Now let’s look at Nevada. It presents a similarly incredible picture. Whereas Obama in 2012 won 531,373 votes from Nevadans, Biden, we are led to believe, won 703,486 such votes, besting his former boss by 172,113 votes—improving on Obama’s performance by 32.39 percent. Again, Trump, who gathered 669,890 Nevada votes, would have soundly defeated a candidate turning in an Obama-level performance.

All six swing states still in dispute—Michigan, Pennsylvania, and Wisconsin, in addition to Georgia, Nevada, and Arizona—were won by Trump as of midnight on Election Day, and all experienced a massive “blue-shift” in the early morning hours of Nov. 4.

Now we learn, thanks to the court-ordered forensic audit of the Dominion Voting Systems servers in Antrim County, Michigan, that the Dominion software somehow experienced an astounding 68.05 percent error rate in electronic tabulation log events (pdf).

The Election Assistance Commission (originally the Federal Election Commission) allows a maximum error rate of just 0.0008 percent (pdf). That is, the 68.05 percent audited error rate for Dominion software in Antrim County is a staggering 85,000 times the allowable error rate.

Even more shocking (if that’s possible) is a YouTube video of a Georgia election official showing how Dominion’s so-called “adjudication” function works. Whoever dreamed of such a thing—“adjudicating” ballots? Sounds like a communist election-rigging strategy to me.

The idea behind “ballot adjudication” apparently is this: If a paper ballot is ambiguous—say a voter voted for both Trump and Biden (an “over-vote”) or the circles are filled out incompletely—the software assigns the ambiguous ballot to “adjudication” so that, in theory, an election official or team of such officials can examine the paper ballot and “adjudicate” it, i.e., decide who the voter intended to vote for and input that election official’s determination into the vote count.

In the video, the official first feeds into a scanner a series of paper ballots. The Dominion software then records in one or more “batches” the scanned ballots. In this demonstration, all 16 scanned ballots are put “into adjudication” by Dominion software, even though nothing is wrong with any of the ballots. There is no “over-voting” (e.g., darkening the circle for both Trump and Biden) or incomplete circles, but somehow all 16 ballots are assigned for adjudication.

The election official then demonstrates how she can “adjudicate” any one of the 16 ballots and change the vote from Trump to Biden or any way she pleases.

This demonstration of Dominion’s adjudication function is shocking and could explain Biden’s otherwise inexplicable performance relative to Obama in the six swing states Biden somehow won after Election Day ended.

Dominion CEO John Poulos finally agreed to testify at the Michigan legislative hearings, where he was dismissive of the claims about Dominion’s adjudication function having been used to swap votes from Trump to Biden in Antrim County. Poulos says this was all “impossible” and that he had “difficulty even knowing where to begin” because—listen very carefully—Antrim County didn’t even license the “digital adjudication” system.

As a battle-tested commercial trial lawyer, my ears are trained to pick up misleading (even if technically accurate) testimony. I’m willing to bet that Dominion offers a “digital” adjudication function whereby ambiguities in a paper ballot are “adjudicated” by a computer viewing digital images of scanned paper ballots, and not by human election officials looking at the actual papers ballots.

So the real question that remains is this: Was the (non-digital) adjudication function used—by corrupt clerks—to change votes? Here, I’m willing to bet that the Dominion software has a “sensitivity” setting that determines how tiny an error on a paper ballot must be for the computer to assign it to “adjudication” (so that that ballot can then be “adjudicated” by one or more election officials). In typical paper ballots, the voter’s choices are registered by the voter coloring in an oval. Obviously, no voter is perfect on the microscopic level in coloring in the entire oval’s area.

It’s not yet known how many mail-in ballots were sent by the Dominion software into adjudication, but reports are circulating that very high percentages—upwards of 80 percent—of the paper ballots in some areas scanned by the Dominion software system automatically were assigned into “adjudication.” Then it was up to election officials to potentially change Trump votes to Biden “as needed” in the early morning hours of Nov. 4.

As Roger L. Simon pointed out in an opinion piece for The Epoch Times, the Michigan lawmakers weren’t equipped to cross-examine Poulos, and thus reveal the “whole truth”—cross-examination is an art form, and it takes years to develop the necessary skills.

That’s why it’s crucial that the Dominion machines be impounded now under the order of President Donald Trump. Only a forensic examination of the machines will reveal the fraud.

The fraudulent use of Dominion’s adjudication function could explain how Trump went from winning all six of the disputed swing states at midnight on Election Day to miraculously losing all six in the wee hours of the following morning.

Millions of votes could easily have been changed through adjudication, and this would explain how Biden shattered all previous records and bested his former boss, to whom he lost in the 2008 primary, while “campaigning” from his basement in a state of serious cognitive decline.

This also explains Dominion’s carefully crafted denial of voter fraud emanating from its software. With regard to Antrim County, Dominion said (emphasis mine), “The issue with election results reporting in Antrim County was due to user-error.”

In other words, Dominion supplied the means for rampant fraud—through its adjudication function and the automatic assignment of unambiguous ballots to adjudication—but an election official who doesn’t work for Dominion actually committed the fraud.

Stephen B. Meister
Follow
Stephen Meister is an attorney in New York City.