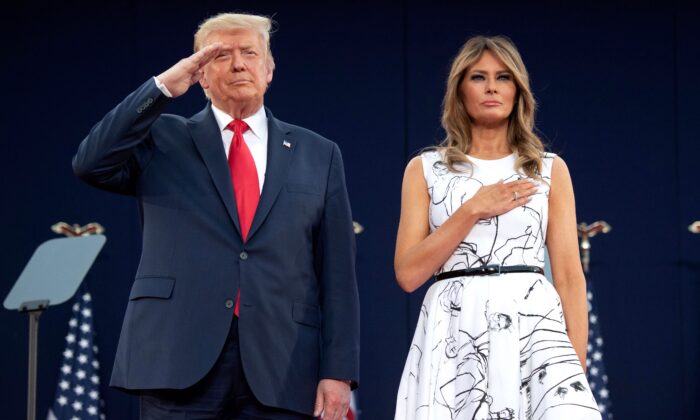 President Donald Trump and First Lady Melania Trump pay their respects as they listen to the national anthem during the Independence Day events at Mount Rushmore National Memorial in Keystone, S.D., on July 3, 2020. (Saul Loeb/AFP via Getty Images)
Viewpoints

In reply to Todd Starnes’s Dec. 11 post on Twitter that said, “At this point [Donald Trump] should declassify everything. Everything,” President Donald Trump wrote, “I have been doing this. I agree!”

I have been doing this. I agree! https://t.co/1YTTGwxlxx

Excellent advice. Indeed, Trump should use this time to strike blows against the “deep state,” corrupt politicians, foreign enemies, and all who have endangered our national security and domestic liberties. In other words, he should declassify far more than has been done to date.

The president should declassify and publicly release everything possible within these categories, as well as all such non-classified information that’s currently unknown to the public. This should become the highest priority in the White House through Jan. 20, 2021.

If Joe Biden does become president, he’s already signaled he would retreat from Trump’s retaliation to China’s trade war and may retreat from upholding freedom of the seas in the South China Sea. Iran has already been promised it will receive the victorious gift of lifted sanctions and a resumption of trade by reinstating—without preconditions—the Iran deal that secures its ability to build atomic weapons and the intercontinental ballistic missiles to deliver them anywhere on earth.

Release of key documents, classified or not, as the light of truth, will help restrain the worst instincts of Joe Biden, Sen. Kamala Harris, and those who may run the next administration.

What are the deep state agendas against liberty and the president? What documents, intelligence, and memos exist in government to demonstrate it? The public has the right to know the truth. Declassify and release everything.

According to Chinese whistleblowers, China’s “gain-of-function” experiments reportedly made the CCP (Chinese Communist Party) virus transmissible to humans, and their deliberate actions to spread it globally acted like a continuing nuclear strike on economies and social life in America and around the world. How many Chinese have died from the virus? Some open sources hint at millions. What role did U.S. persons and organizations play in the construction of China’s biological laboratories? Declassify and release everything.

The Biden family’s reportedly questionable business dealings with China and other adversaries would directly compromise our national security during his entire term and beyond. Is there intelligence on this? Declassify and release everything.

We’ve learned a little bit about the contents of Hunter Biden’s laptop, Chinese collusion, and his alleged tax issues—contents that reportedly reveal improper or perhaps illegal collusion with foreign governments. It’s time to release everything regarding the investigation and the full contents of the laptop, except the reportedly illegal photographs. The FBI under Biden would likely bury the evidence forever, denying justice and allowing a continuation by the Biden administration of the same level of corruption that benefits China and our other enemies. Release everything.

Have documents been turned over to the Department of Justice that relate to our national security? Biden’s administration may bury all such investigations. Declassify and release everything.

What are all the levels of collusion by Democratic and “deep state” officials with China, Ukraine, Russia, Iran, North Korea, Cuba, Venezuela, terrorist organizations, and so on? Of particular interest should be those who may become high and low officials in a Biden administration. Declassify and release everything.

Did Hillary Clinton’s non-secure emails result in the death of the ambassador to Libya, J. Christopher Stevens, and the three others in Benghazi? Declassify and release everything.

What does the government know about how the tech giants censor news, ideas, and opinions within the United States? Did past administrations encourage their actions? Censorship was a part of the efforts to defeat Trump in the election. What is the full extent of the user data they amass and sell? The public deserves to know. Declassify and release everything.

Are any members and staff of Congress illegally in contact with enemy governments? Could intelligence from classified briefings and documents that members are entitled to receive end up in the hands of foreign governments or terrorist organizations? What is the full extent of foreign infiltration of Congress and government agencies? Declassify and release everything.

Have there been threats and intimidation by China, Russia, Iran, North Korea, and other nations that past administrations agreed to and kept silent about? The light of truth will force better policies in the future. Declassify and release everything.

Were there secret codicils and agreements associated with the Iran nuclear deal that benefited the Iran regime and their terrorist allies, or that gave tacit approval to a future Iranian nuclear weapon? Declassify and release everything.

What unrevealed actions did former President Barack Obama take to interfere in foreign elections that aided enemies of liberty and opponents of strong allies such as Israeli Prime Minister Benjamin Netanyahu? Declassify and release everything.

Has Biden already made dangerous concessions or promises to governments in China, Iran, Russia, North Korea, Ukraine, Cuba, Venezuela, and so on? Is there intelligence on this? Declassify and release everything.

Do any of Biden’s named or likely nominees and advisers have connections with foreign governments that would endanger their ability to act for the best interests of the United States? These should be known before their confirmation hearings. Declassify and release everything.

There’s always a balance between the need to declassify information of importance to justice and the national debate, and the need to protect sources and methods.

Due to the magnitude of the possible long-term harm to our liberty and national security from continued secrecy in these categories, the need to expose these threats should tilt the balance toward declassification. Additionally, a Biden administration may destroy or bury many such documents, forever covering up any crimes, aid to or collusion with our enemies, and the agendas of those who aim to take away American constitutional liberties. Declassify and release everything. Now.

Merely declassifying such documents means they may still forever remain hidden from the public or could still be destroyed by a new administration. Everything, whether declassified or never-classified, must be publicly released before Jan. 20.

The president has the authority to declassify and release any such documents, and this final action would strike a great blow for liberty and against enemies of liberty. Jan. 20 is fast approaching; it’s time to act.

Declassify and release everything. Everything.