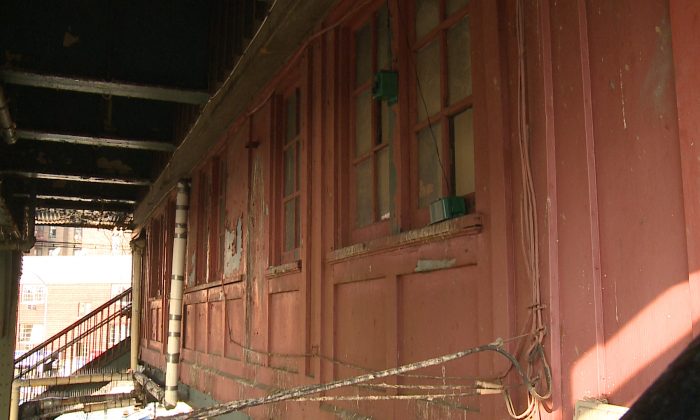 NEW YORK—Pigeons have long caused a filthy nuisance on a stretch of elevated subway stations on the 7 train in Queens, but that may be a thing of the past.

Four months ago, Council member Jimmy Van Bramer announced the installation of a pigeon mitigation system at three subway stations in Queens. Now, the bulk of the work is complete.

At the 52nd street stop at Lincoln Avenue, shrill squawking noises resembling the cries of jungle animals now greet passengers approaching the station. The noises are recordings of predatory birdcalls emitted from little speakers that are meant to scare off pigeons. The speakers also emit sonar waves inaudible to human ears.

The predatory cries, combined with wiring, netting, nylon spikes, and angled edges, turned the usually cozy underbelly of the elevated subway tracks into a nightmare for pigeons looking for a place to roost.

“Pigeon poop isn’t a joke,” Van Bramer told reporters. “It is something that is terribly disgusting. It makes our neighborhood look unattractive and it is also a health hazard.”

On July 30, Van Bramer announced that he allocated $250,000 to fund the “war on pigeon poop within the 26th District.” The pigeon-deterring installations are located at 46th Street–Bliss, 52nd Street–Lincoln Avenue, and 61st Street-Woodside stations on the 7 Line.

The 52nd Street station is currently the only station that sounds like the depths of a jungle.

It may seem like $250,000 is a lot to spend on shooing birds, but subway riders said that the area used to be infested with pigeons. They perched on the beams of the elevated tracks and on the ledge of the stairs. People below often found unpleasant surprises dropped on their heads or clothes.

At one point, the area under the subway was almost impossible to walk through because of the large number of pigeons gathered there, according to one Woodside resident.

Now, only a few pigeons can perch at the station, ironically right next to the speakers.

Michael Joya, the owner of a flower shop under the subway station, commends the new installation, but doesn’t think it will solve the problem.

Joya said that some people in the neighborhood feed the pigeons and attract them to the area by the flock.

“There’s this one woman who would cut a hole in the bottom of a bag of bird feed and just walk around with it,” he said.

Joya thinks the ultimate solution is to fine the people who are feeding the birds, but the installations are a good start.

The method of using predatory birdcalls to ward off pigeons has been applied in other subway stations and bus depots around the city as well.

“We find that [the sounds] have been very effective,” MTA spokeswoman Judie Glave wrote in an email.

The ultrasonic speakers will also be installed at 61st Street by the end of the year.