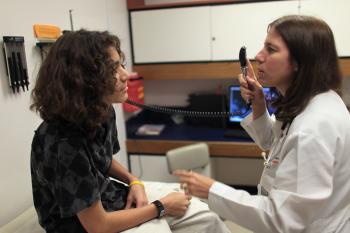 Pre-existing conditions: University of Miami Pediatrician Endocrinologist Dr. Janine Sanchez examines Roberto V. Murillo,13, in an examination room at the University of Miami Leonard M. Miller School of Medicine on September 23, 2010 in Miami, Florida. An Obama administration study found that as many as half of Americans may have pre-existing conditions. (Joe Raedle/Getty Images)
US

‘Pre-Existing Conditions’ Exist in as Many as Half of Americans: Study

By Mary Silver
Print
As many as half of Americans under the age of 65 have pre-existing conditions that would make it harder for them to get affordable health insurance if not for health care reform, according to a report released on Jan. 18. Americans over 65 are covered by Medicare.

The Department of Health and Human Services report is called “At Risk: Pre-Existing Conditions Could Affect 1 in 2 Americans.” They considered pre-existing conditions to be life-threatening illnesses such as cancer and heart disease, and to be chronic conditions such as asthma, arthritis, and diabetes. Far more people with pre-existing conditions than without currently have no health insurance, according to the department survey.

Congress returned to legislating on Jan. 18 after pausing for a week after the tragic events in Tucson, in which a member of Congress and 19 other people were shot. House Republicans intend to pass a symbolic resolution to repeal health care reform. They are likely to vote on it on Wednesday, Jan. 19. It is symbolic because the Senate, still controlled by Democrats, is unlikely to overturn the 2010 Patient Protection and Affordable Care Act.

According to the report, provisions in health care reform are already protecting people by forbidding insurers from denying coverage to those with pre-existing illnesses.

“Thousands of uninsured people with pre-existing conditions have enrolled in the temporary high-risk pool program called the Pre-Existing Condition Insurance Plan (PCIP), which has already saved people’s lives by covering services like chemotherapy,” said the report.

Those with illnesses can be discriminated against in the workplace because hiring them can drive up insurance costs, said the report. When health care reform is fully implemented, everyone will be covered, and one person’s illness will not drive up costs for a small business. No insurance pool will be so small that one illness will drive up costs, according to the report.