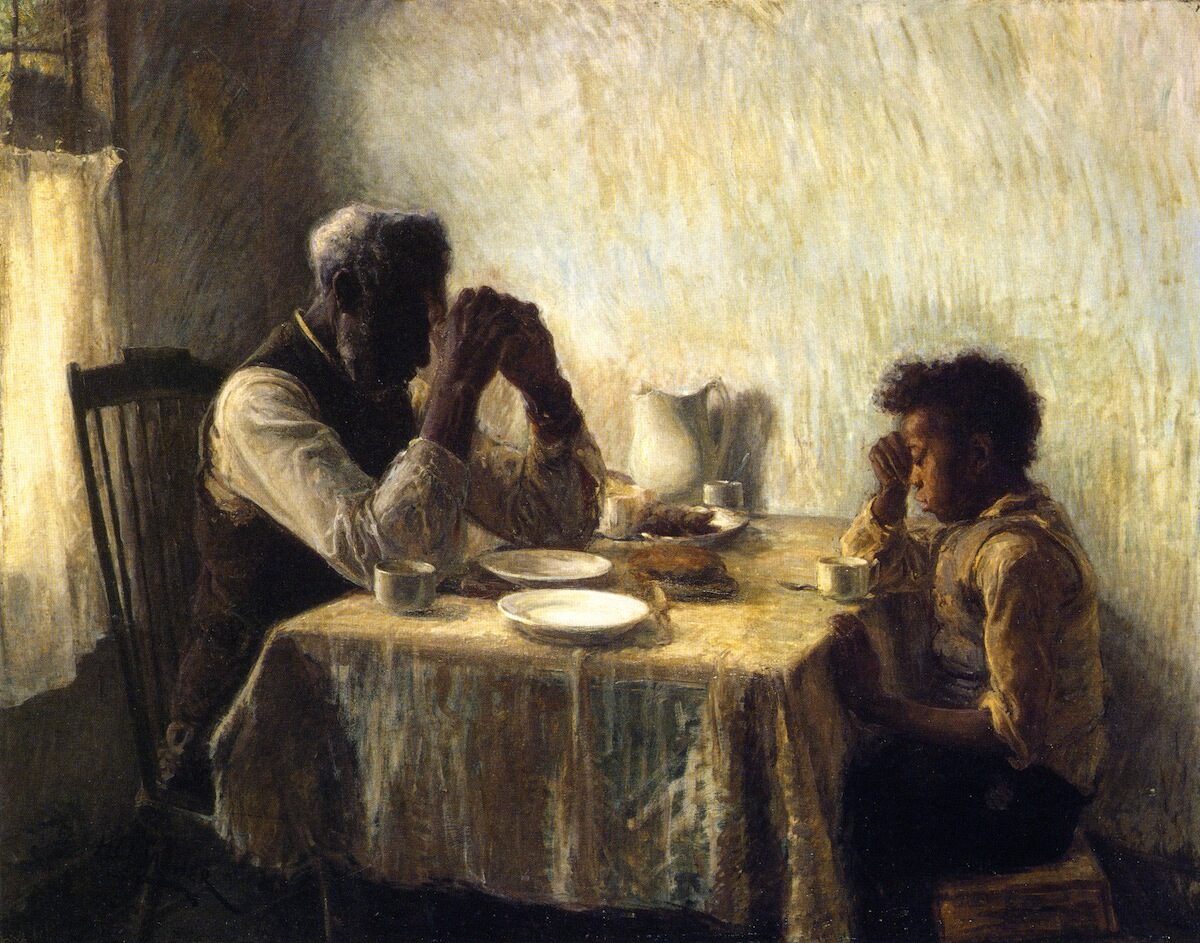 Reaching Within: What traditional art offers the heart
BY Eric Bess TIMENovember 24, 2021 PRINT

Thanksgiving is here, and I’ve been thinking deeply about what it means to be thankful. What does it mean to have gratitude, and for what should we be grateful?

Sometimes, holidays like Thanksgiving can be stressful. For instance, some of us might have to host and cook for our families. Others might have no one to spend Thanksgiving with. Still others may want to avoid divisive political conversations, which some family members instigate at gatherings.

Thanksgiving, however, can be different. The holiday can remind us that there is always something for which we can be thankful.

Henry Ossawa Tanner, one of the first world-renowned African American artists of the 19th century, painted “The Thankful Poor.” The painting suggests a way of living in the world with gratitude.

Two figures, an older man and a young boy, sit at a kitchen table and prepare to eat. Despite the meager amount of food on the kitchen table, they both bow their heads in thankful prayer though the boy’s pose is less formal than the older man’s. Their empty plates await the food once their prayer is complete.

Behind the older man, a single window shines light on the scene. Because of his positioning, the older man’s face is shrouded in shadow, but the young boy’s face is illuminated with yellow light.

Tanner’s painting reminds me of how important it is to be grateful even when there’s a lack of abundance. The man and boy are practicing gratitude by way of their prayer despite their paltry servings.

Tanner called his painting “The Thankful Poor,” which brings attention to the fact that even those of us who have little can still find things for which we can be thankful.

Sometimes, people tell me how grateful they are for the hardships they experience. Their hardships, they tell me, have helped them become the people they are now. Of course, having the foresight to practice gratitude while experiencing hardship is easier said than done, but we definitely come to learn life lessons through hard times.

It’s also important to note that the man and boy are praying. They are showing their gratitude to God. Despite their small lot, they are thankful to God, which suggests that they believe God knows what is best for them.

Their prayer also suggests that what they receive through God sustains them beyond the food on their table. Their belief in God makes them richer than they seem.

Finally, I can’t help but sense the connection between the older man and young boy. I assume that the older man is the boy’s father or grandfather. Either way, the older man has a presence that suggests that he is leading the young boy; he is teaching the boy how to be grateful to God no matter how little one has, that is, to live a life of gratitude and to be grateful to be alive. Despite the boy’s less formal pose, the light shining on his face suggests that he is the focal point and that it is up to him to carry the practice of gratitude forward.