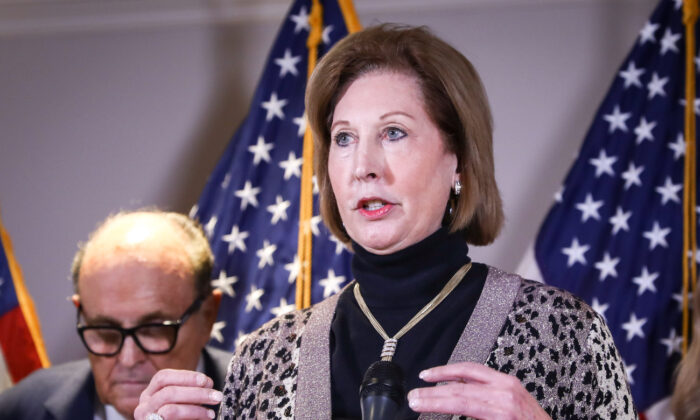 Attorney Sidney Powell has asked a federal court to urgently order Georgia’s officials to de-certify the Nov. 3 election results and preserve forensic data on the voting machines while the lawyer challenges the integrity of the state’s votes.

Powell on Friday filed a motion asking for immediate injunctive relief arguing that the plaintiffs would suffer irreparable harm if election officials from Union County were not blocked from wiping forensic data from voting machines and resetting the count back to zero. Union County officials informed the plaintiffs that machines would be reset on Nov. 30.

Meanwhile, the attorney also argued an injunction to de-certify the election results or to block the transmission of the certification of the state’s election results is necessary in order to preserve the status quo while her case plays out in court.

“The low costs to Defendants and high potential harm to Plaintiffs make this a case with a substantial net harm that an immediate and emergent injunctive relief can prevent. Therefore, it is respectfully requested that the Court grant Plaintiffs’ Motion,” the motion states (pdf).

Powell, who is pursuing accountability for voter fraud instances stemming from the use of the Dominion Voting System, filed the lawsuit on Nov. 25 alleging “massive election fraud” and multiple violations of the Constitution and Georgia’s state laws in the 2020 general election.

The suit was filed on behalf of Republican Party nominees for the Electoral College, Cobb County Republican Party Chairman Jason Shepherd, and the assistant secretary of the state Republican Party, Brian Jay Van Gundy. Defendants in the suit include Gov. Brian Kemp, Secretary of State Brad Raffensperger, and other election officials.

The complaint makes 30 allegations, many based on witness or expert analysis, of election fraud or irregularities that occurred in the Nov. 3 election. Among those include allegations that the software used by Dominion machines was accessed by foreign agents from China and Iran “in order to monitor and manipulate elections,” according to a redacted declaration of a former electronic intelligence analyst under 305th Military Intelligence.

“By using servers and employees connected with rogue actors and hostile foreign influences combined with numerous easily discoverable leaked credentials, Dominion neglectfully allowed foreign adversaries to access data and intentionally provided access to their infrastructure in order to monitor and manipulate elections, including the most recent one in 2020,” the suit says.

Another sworn affidavit alleges that the software of a different voting machine’s company was designed for the Venezuelan government with the specific purpose to rig elections without the risk of getting caught, something that company has denied. The affiant said he was part of a national security detail to former Venezuelan socialist dictator Hugo Chavez.

The motion argues, relying on expert analyses and witness statements, that “illegal ballots” were counted during canvassing and that “fraudulent activity by election officials” had occurred. The motion and complaint also alleged that ballot stuffing and vote manipulation also occurred.

One incident the lawyer cited was the evacuation of State Farm arena, a ballot counting center, due to a plumbing leak. The suit alleged, referring to a video, that the incident was not a threat because “there was no flood or no emergency.” It added that after poll challengers and other personnel left the premises, several election workers stayed behind and continued feeding votes into the Dominion voting machines for over three hours.

“Without supervision or challengers, election officials could have processed tens of thousands of votes from phony vote machine memory cards and thumb drives,” the lawyer argues.

“This kind of voter manipulation would not be uncovered during a recount because the voting ballots and memory cards with the phony information would just be counted again and run through the same tainted tabulation machines,” she added.

The suit is also asking the court to order the production of “36 hours of security camera recording of all rooms used in the voting process at State Farm Arena” between 12 a.m. Nov. 3 and 12 p.m. Nov. 4.