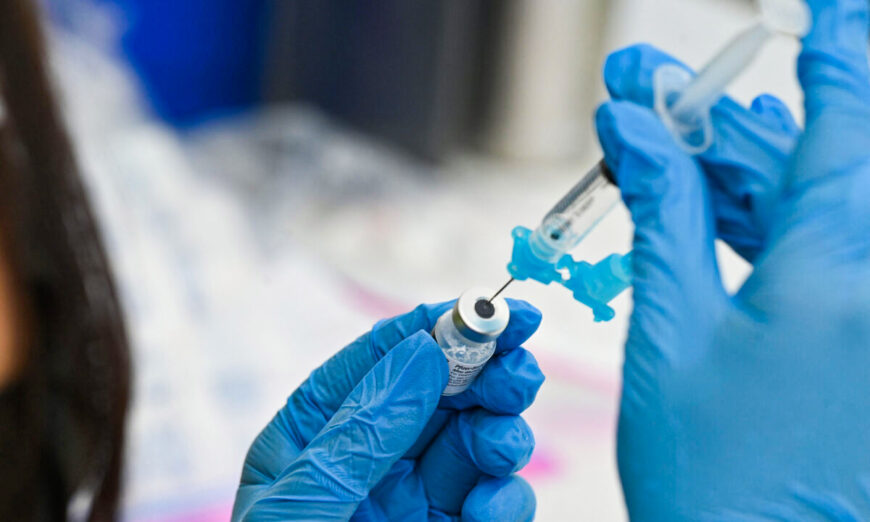 A health care worker fills a syringe with Pfizer's COVID-19 vaccine in a file image. (Robyn Beck/AFP via Getty Images)

Heart abnormalities were detected in some adolescents months after COVID-19 vaccination, according to a study.

Researchers at Seattle Children’s Hospital reviewed cases of patients younger than 18 who went to the hospital with chest pain and elevated serum troponin levels, two key markers of heart inflammation, within a week of getting a second dose of Pfizer’s COVID-19 vaccine.

While 35 patients fit the criteria, 19 were excluded for various reasons, including receiving care in another state after the initial visit. Cardiac imaging of the remaining 16 patients, performed three to eight months after they were first examined, showed 11 had persistent late gadolinium enhancement, a heart abnormality, though at lower levels than months earlier.

The follow-up imaging also revealed abnormal global longitudinal strain, a measure of heart function, in three-quarters of the patients, with little change from the initial examinations, as well as “significantly improved” measures of blood pumping and no detected regional wall motion issues, another abnormality.

Researchers said that while symptoms “were transient and most patients appeared to respond to treatment,” the study showed a “persistence of abnormal findings,” noting that late gadolinium enhancement is known as an indicator of heart injury and is associated with a worse prognosis in patients with typical myocarditis.

The findings “rais[e] concerns for potential longer-term effects,” they wrote, adding that they plan to repeat imaging at one year after the vaccine to assess whether problems are still present.

The findings were published following peer review in The Journal of Pediatrics. The researchers said no funding was received for the paper.

Pfizer and the U.S. Centers for Disease Control and Prevention (CDC) didn’t respond by press time to requests for comment.

Dr. Anish Koka, a cardiologist who wasn’t involved with the study, said it suggests that 60 to 70 percent of teenagers who get myocarditis from a COVID-19 vaccine may be left with a scar in their heart.

“Certainly, children who had chest pain severe enough to merit seeking medical attention need to at least make sure they get a follow up MRI,” he told The Epoch Times in a message on Twitter, adding that the findings “should have clear implications for the discussion around vaccines, especially for high risk male teenagers … and definitely for vaccine mandates.”

The Pfizer and Moderna COVID-19 vaccines, both built on messenger RNA technology, have been linked with several forms of heart inflammation, including myocarditis and pericarditis, according to data from multiple countries.

The conditions have been seen at much higher than expected rates in youths, especially young men, according to data reported to the CDC. The most at-risk group is 16- and 17-year-old males, who have reported rates of 69 per million after second doses of Pfizer’s two-dose primary series in the United States. The problems are likely underreported.

The heart inflammation often leaves people short of breath, with chest pain and other symptoms. Many patients are admitted to the hospital, and a small number of deaths have been reported.

A survey conducted among some of the youth whose conditions were reported to the CDC at least 90 days after they first experienced symptoms found that about half were still suffering from at least one symptom, such as chest pain.

About 4 in 10 patients were still on exercise restrictions months after experiencing the inflammation, a parallel survey with the patients’ health care providers found.

Providers also disclosed that cardiac imaging done months after symptoms appeared still showed abnormalities for some patients, with late gadolinium enhancement being the most frequent.