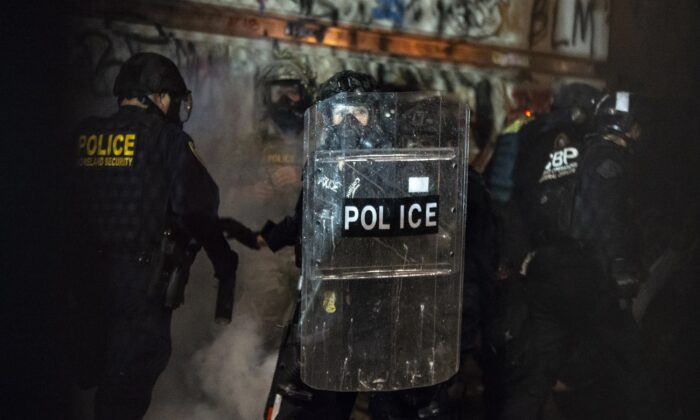 A federal police officer takes cover behind a shield while clashing with rioters at the Mark O. Hatfield U.S. Courthouse in Portland, Ore., on July 23, 2020. (Nathan Howard/Getty Images)
US News

All Portland police officers are barred from working together with federal officers under new policies the City Council passed late July 22.

The resolutions state that any member of the Portland Police Bureau who “provides, requests, or willingly receives operational support from militarized federal forces” will face disciplinary measures. They also block police from using force against or arresting journalists or legal observers.

Wheeler, the city’s mayor and police commissioner, said after the vote that he was proud to cosponsor the resolutions, “affirming that Portland will not coordinate with federal troops occupying our city, and that journalists will not be targeted.”

The mayor later in the day joined a crowd that included rioters attacking the Mark O. Hatfield Courthouse, a federal building.

The Portland Police Association, a police union, and the bureau didn’t respond to requests for comment on the resolutions.

Acting Homeland Security Secretary Chad Wolf said in a statement that the decision to stop cooperation with federal law enforcement was “dangerous” and “irresponsible” and called local and state leaders to denounce the action.

Portland’s governmental system has a group of commissioners on the City Council, each with a different role. All the current commissioners are Democrats.

Eudaly and Hardesty claimed that demonstrators gathering each night have been peaceful, despite video evidence and photographs showing the groups have each night engaged in criminal conduct before federal officers respond. They also said federal officers are using disproportionate force. At least one federal officer is under investigation.

“It is really clear that we as a council must take a strong stand against Portland Police Bureau collaborating and cooperating with this federal goon squad that has been sent to Portland to stymie people who are demanding changes in our policing efforts,” Hardesty said during the council hearing.

During a separate virtual event on July 22, Hardesty claimed that the bureau has been sending “saboteurs and provocateurs,” who set fires and commit crimes that lead to a response against “peaceful crowds.” Hours later, she issued an apology for spreading “unfounded claims and misinformation.”

Hardesty is attempting to wrest control of Portland police from Wheeler, who has so far resisted those efforts. She released a plan this month that calls for defunding the police.

The City Council has placed limitations on the police force, including limiting the use of tear gas and other crowd control munitions. Federal officers are under no such restrictions. Wheeler has called on them to abide by them.

Acting Homeland Security Chad Wolf told reporters at the White House on July 22 that Portland has seen nearly two months of “coordinated violent attacks by anarchists against a federal courthouse and federal law enforcement officials sworn to protect it.”

The secretary has said the federal government doesn’t need an invitation from cities to protect federal property. He has also asserted that a surge in federal assets to Portland wouldn’t have been necessary if local law enforcement officers were doing their job.

Portland Police Chief Chuck Lovell told reporters last week that his officers at times would take action near federal officers but neither group directed the actions of the other.

“We do communicate with federal officers for the purpose of situational awareness and deconfliction. We’re operating in a very, very close proximity to one another,” he said.

Wheeler recently ordered federal agents to remove themselves from the Portland police command center, while the city’s fire bureau, which Hardesty oversees, is no longer letting any law enforcement officers use fire stations.

Portland police officers were noticeably absent in recent days even as riots raged in the area of the courthouse, which sits blocks away from a police precinct.

Federal agencies and officials, meanwhile, are facing a flurry of action in courts and elsewhere as local and state elected officials, along with members of Congress, search for legal avenues to oust them from Portland.

Oregon’s Attorney General Ellen Rosenblum filed a lawsuit this month that seeks to prevent federal forces from arresting people. Sen. Jeff Merkley (D-Ore.) introduced an amendment that would limit the use of federal officers for crowd control. A bicameral group of Congress members are pushing the inspector generals of the Departments of Homeland Security and Justice to investigate the use of federal force to quell violent demonstrations, and Democrat senators demanded details of the operation.

A different group of federal lawmakers wrote to the White House this week urging the Trump administration to block taxpayer funding from going to states and cities that are allowing anarchists to run rampant.