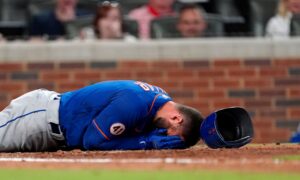 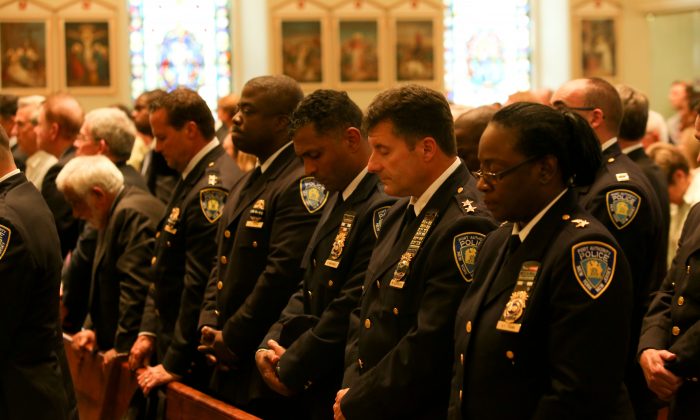 Port Authority Police Department officers attend an interfaith service at St. Peter's Church on Sept. 11, 2013, in remembrance of the employees of the Port Authority of New York and New Jersey who died on 9/11. Eighty-four employees, including 37 police officers, lost their lives in One World Trade Center on Sept. 11, 2001. (Christian Watjen/Epoch Times)
New York

About 500 friends, family, and colleagues of those killed attended the ceremony, which commemorated the 12th anniversary of the attacks.

Mayor Michael Bloomberg, who spoke at the remembrance service, said the attacks did not weaken the city’s resolve to make progress. He also said that rebuilding the World Trade Center represents revival, and making the city “a better place for those who will come here.”

Bloomberg hoped the 9/11 museum, set to open next year, and the memorial, which opened in 2010, will help educate future generations “so they will never put us in a situation where someone will attack us again.”

Around 1,400 Port Authority of New York and New Jersey (PANYNJ) employees worked out of the headquarters at One World Trade Center at the time of the attacks.

Thirty-seven PANYNJ police were killed during 9/11, including Fred Morrone superintendent of police and director of public safety.

Louis Koumoutsos, now the chief of the Port Authority Police Department, was called to respond shortly after the attacks occurred.

He said the World Trade Center (WTC) site looked like a war zone when he arrived.

“The dust, the people in the streets, the piles of rubble between the North and South Towers,” said Koumoutsos after the service. “You come back and reflect on what you see now and what you saw 12 years ago.”

At the end of October, PANYNJ moves into its new offices in 4 World Trade Center, which will be the first of five office buildings on the WTC site to open, according to a report in Real Estate Weekly.

Patrick Foye, PANYNJ executive director, said tenants of the towering 1,776-foot One World Trade Center will start to move in next year.

Foye said people who viewed the World Trade Center redevelopment would view it as “a symbol of American resilience.”

Lorraine Porter-Bell was a senior project manager at Terminals, Tunnels, and Bridges at PANYNJ at the time the planes hit the World Trade Center towers. Twelve of her colleagues were killed.

“My boss, secretary, colleagues, so I never forget to come, to pay homage to their memory,” she said. “I loved my boss, Steven Fiorelli.”

Porter-Bell was on the 64th floor when suddenly “confusion and chaos” broke out. She remembered the heartbreak of trying to get out of the building, which had made a huge shift, and seeing firemen coming up the stairs.

“It took a long time to come down. I lost my shoes. When you got down to the street the dust from the South Tower coming down covered everybody.”

She and her colleague, Carole Margetson, walked across the Brooklyn Bridge to get home. When she finally arrived home, her family all cried.

Two people from their department were among the last survivors found buried in the rubble. One was a woman found on Sept. 12 with just her hand sticking out of the rubble. The other was a man found under a collapsed stairwell, Porter-Bell said.