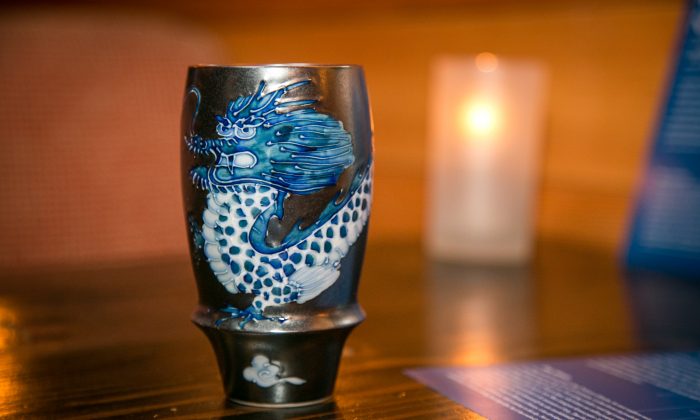 Porcelain has a long history.

The earliest wares—not quite in the form we know today—date back to 1600 B.C., originating from China during the Shang Dynasty. The porcelain we know today, glazed and highly durable, dates back to the Eastern Han Dynasty period (206 B.C.–220 A.D.).

A few centuries later, the porcelain was exported to countries around the world. Japan was an avid importer of Chinese porcelain until the turn of the 17th century, when a Korean potter discovered a great Japanese source of porcelain clay: Arita, in western Japan.

These small batch-made tablewares are traditionally very intricately decorated and can be crafted into any sort of shape.

Unlike the tunnel-like kilns used elsewhere to fire ceramics, in Arita, through trial and error, craftsmen developed a slow-firing kiln that would reach higher temperatures and create a stronger product, according to Ikuko Kuga, the head of Arita Porcelain Lab.

With this traditional firing method, the kiln reaches 1,300 degrees C and the entire process takes three days, resulting in a thin, light, and durable product, she said.

Arita Porcelain Lab was previously named Yazaemon Kiln, which was established over 200 years ago and is one of the region’s oldest and largest-scale operating kilns.

Over the years, the Arita artisans also developed unique glaze colors and a bright enamel painting technique. They created works in the “kakiemon” style, in which sophisticated designs are painted onto a milky white background, and later the “kinrande” style, which look as if they’re embroidered with gold thread.

As early as the 17th century, Arita craftsmanship already had begun to influence other regions, said Akinobu Ozaki, head of the porcelain brand Kikoujin, which is operated by his family business of 140 years. Arita ware was being imported to Europe by the Dutch East India Company, and the kakiemon-style porcelain notably inspired the Meissen kilns in Germany in the early 1700s.

The traditions of Arita and Meissen both revolved around workshops full of specialists. One person creates the vessel, another creates the painted design, someone else does the firing, and so on. The artisans spend years developing their area of expertise.

Fukagawa is part of the 15th generation of his family to continue in the porcelain business. Their company, Koransha, was established in 1879 and has been producing tableware for the Japanese Imperial House since 1896. Even before then, its wares had won top prizes at international expositions in cities such as Paris and Barcelona.

Fukagawa sees it as his mission not only to educate the next generation of Arita ware producers, but to expand this awareness outside of Japan, “to keep it going on, in spirit, and in quality,” he said. Because today, not only is knowledge of porcelain’s history waning, but there are fewer and fewer people who want to learn such a detailed, traditional craft, much less dedicate their lives to perfecting it. “Arita itself has to evolve,” he said.