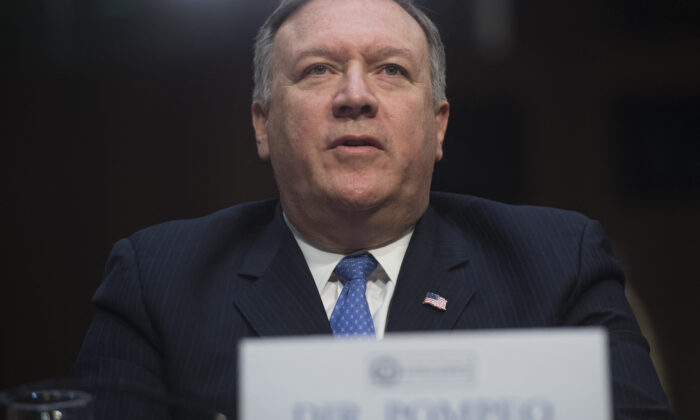 Former Secretary of State Mike Pompeo said that the “most dangerous person in the world” isn’t someone like the leader of nuclear-armed North Korea but American Federation of Teachers President Randi Weingarten because teachers’ unions push “filth” on children and undercut the principle of American exceptionalism.

Pompeo made the remarks in a wide-ranging Nov. 21 interview with Semafor, in which he also discussed the threat to the United States posed by communist China and his regret that, when he served in the Trump administration, “we ran out of time” and didn’t manage to ban TikTok.

The former CIA chief told the outlet that besides being wholly in favor of banning TikTok, which a number of lawmakers have recently called for, “we should ban every element of Chinese technology that sits inside our ecosystem.”

Pompeo also insisted that no Chinese research money should be allowed to flow into America’s senior institutions or national laboratories.

“We closed the consulate in Houston, Texas,” Pomeo said, which he called “the single biggest spy operation ever conducted in America.” He was referring to the decision in July 2020 to close the Houston facility, which Sen. Marco Rubio (R-Fla.) said at the time was “the central node of the Communist Party’s vast network of spies and influence operations in the United States.”

Asked about rumors of his possible run for president in 2024, Pompeo said he hasn’t decided yet and if he ultimately concludes someone else would be better suited for the top job, he’s “going to go work really hard for her or him.”

Former President Donald Trump, widely seen as a favorite to win the Republican nomination, recently announced his 2024 bid for the White House.

Asked about the central themes that a Republican presidential candidate should be running on, Pompeo said it’s the “timeless” ideals of limited government, more freedom, and “protecting the capacity of people to practice their faith.”

‘The Most Dangerous Person in the World’

Pompeo then said he’s often asked: “Who’s the most dangerous person in the world? Is it Chairman Kim, is it Xi Jinping?” referring to the leaders of China and North Korea.

“The most dangerous person in the world is Randi Weingarten,” Pompeo said, adding that, “It’s not a close call.”

“If you ask, ‘Who’s the most likely to take this republic down?’ It would be the teachers’ unions, and the filth that they’re teaching our kids, and the fact that they don’t know math and reading or writing,” he continued.

Asked if his remarks about Weingarten being the most dangerous person in the world or pointing to “something crazy in a textbook or classroom” is about “owning the libs” rather than substantive criticism, Pompeo said it’s about more than just scoring political points.

“If there’s something in the textbook that shouldn’t be there, it’s OK to identify that and call it out. But that’s just openers. That’s identification of a risk,” he said.

One contentious issue that has caused uproar among some parents is the teaching of critical race theory (CRT) concepts in U.S. schools.

A core idea behind CRT is interpreting society through a Marxist dichotomy of “oppressor” and “oppressed,” but replacing class categories with racial groups. Proponents of CRT typically claim that “systemic racism” and “white supremacy” persist in all aspects of American life while demanding the implementation of “anti-racist” policies, such as race-based redistribution of wealth and power along perceived lines of “racial inequity.”

Opponents tend to argue that CRT and its concepts are needlessly divisive and, ironically, racist.

Some schools have denied that they’re teaching CRT-related concepts, and multiple left-leaning individuals, groups, and media outlets have also pushed back on claims that it’s being taught at schools. But a recent study has determined that CRT concepts are being taught in America’s schools, despite denials from some individuals or groups.

Besides touching on the presence of objectionable content in some educational textbooks, Pompeo said that if children aren’t educated in a way that makes them appreciate the principle of American exceptionalism, “we’re done.”

“If they think it’s an oppressor class and an oppressed class, if they think the 1619 Project, and we were founded on a racist idea—if those are the things people entered the seventh grade deeply embedded in their understanding of America, it’s difficult to understand how [Chinese leader] Xi Jinping’s claim that America is in decline won’t prove true,” Pompeo said.

The 1619 Project is essentially the claim that the United States wasn’t founded in 1776 on the principle of freedom but in 1619 on the back of slavery and oppression, and that these notions remain deeply embedded in today’s America. It has been challenged by numerous historians, with some denouncing the 1619 Project as a falsification of history.

Weingarten reacted to Pompeo’s remarks in a series of posts on Twitter, saying that she was unsure whether to describe his characterization of her “as ridiculous or dangerous.”

“So Mike, let me make it easy for you. We fight for freedom, democracy, and an economy that works for all. We fight for what kids & communities need. Strong public schools that are safe and welcoming, where kids learn how to think & work with others. That’s the American Dream!” Weingarten said in one of the posts.

“And we fight against this kind of rhetoric and hate. Maybe spend a minute in one of the classrooms with my members and their students and you will get a real lesson in the promise and potential of America,” she continued.

Pompeo, who also served as secretary of state and a congressional representative, told Semafor that, over the course of his many years of public service, he has fought for conservative principles, which he said make “America better” and create circumstances in which families thrive.