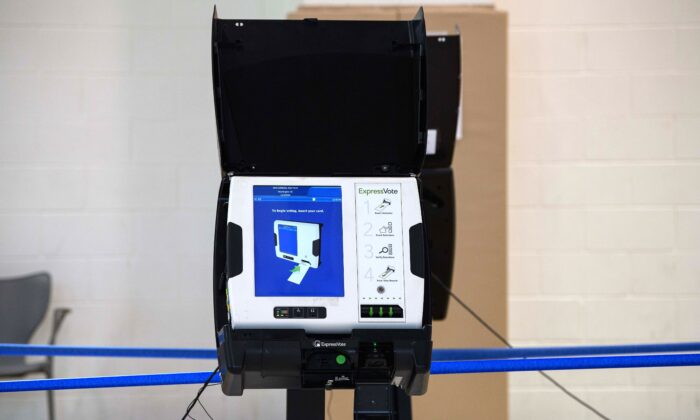 An electronic voting machine is seen at a polling station in Washington, on Oct. 29, 2020. (Nicholas Kamm/AFP via Getty Images)
By Tom Ozimek

A Republican poll observer from Pennsylvania’s Delaware County told a Senate GOP Policy Committee hearing in Gettysburg on Nov. 25 that he witnessed a range of Election Day irregularities, including 47 USB cards that went missing.

Greg Stenstrom, who, besides being a poll watcher, said he’s an expert in security fraud, told the hearing that he witnessed a number of chain-of-custody violations, including around mail-in ballots, the balance of votes from drop boxes, and the handling of USB card flash drives—all of which he said broke rules defined by the Delaware County Board of Elections and the election process review.

“They didn’t follow one,” Stenstrom said. “It shocked me that this could happen.”

He described witnessing a situation in which data on USB cards was uploaded to voting machines by a warehouse supervisor without being observed by a poll watcher, which he said he saw happen at least 24 times.

“He’s walking in with baggies, which we have pictures of and that were submitted in our affidavits,” Stenstrom said, adding that Democratic poll watchers also witnessed this occurrence.

Stenstrom said he was told by an attorney that it’s normal for several USB cards to be left in machines and then brought back by the warehouse manager for input into tally systems. He added that when he later raised the issue with U.S. Attorney William McSwain and some law enforcement officers, he was told it is unusual for more than two drives to be left in voting machines.

He said he was later told that “these 24 to 30 cards that were uploaded” were unaccounted for, adding that “as of today, 47 USB v-cards are missing.”

“People ask me all the time, how do people commit crimes? I know there’s a lot of theories here. And I always look for the simplest thing. People that stick USB sticks in, putting ballots in—a very simple thing. Only takes a couple of people, doesn’t take a big conspiracy,” he said.

“As a forensic computer scientist, my interest is in the data—where did it go? Where did the spoilage go? How did the data come in and go out of the system?” he said.

He called for an audit.

Stenstrom also said that it recently emerged that “virtually all chain of custody logs, records, yellow sheets, everything was gone” in Delaware County.

“They had a signing party where they sat down and coworkers were invited back to recreate those logs,” he said. “And our understanding as of today was that they were unsuccessful in getting them all.”

He said the situation is that there are up to 120,000 ballots that remain “in question.”

“There’s no cure for this, no remedy for this,” he said. “I don’t believe, as a citizen and an observer to this, that anybody could certify that vote in good conscience.”

At the same hearing, President Donald Trump’s attorney Rudy Giuliani said that the type of election irregularities that witnesses described in Pennsylvania also occurred in other battleground states.

“What we’re going to describe to you, with these witnesses, happened in roughly the same way in Michigan, Wisconsin, Nevada, and Georgia—the primary device was mail-in ballots,” Giuliani said, characterizing the election in Pennsylvania as a “sham.”

“We don’t want to disenfranchise anyone. We want to disqualify 672,000 votes so 72 million people are not disenfranchised,” Giuliani said. “Because that’s what happened by the cheating that went on here.”

The former New York City mayor also suggested to Pennsylvania Republican state senators that they have the power to vote and choose their own electors, saying that the Constitution stipulates that state legislators have the authority to nullify a state’s electors and can send their own to the Electoral College. Pennsylvania’s House and Senate are both controlled by Republicans. The Electoral College meets on Dec. 14.

On Nov 24, Pennsylvania Gov. Tom Wolf, a Democrat, announced that the results of the election were certified by the Secretary of State’s office. Georgia Gov. Brian Kemp and Michigan’s Board of Canvassers also certified their elections, although legal challenges are pending.

Pennsylvania Secretary of State Kathy Boockvar, a Democrat, said she has seen no evidence of voter fraud or mass irregularities that would overturn the election results in the state, which show that Biden leads Trump by about 80,000 votes. Election officials in other states where the results are being challenged have echoed those claims.