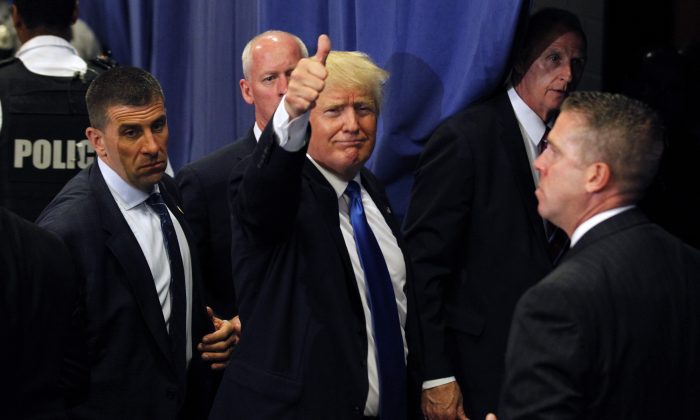 Republican Presidential candidate Donald Trump after a campaign rally at the Sharonville Convention Center July 6, 2016, in Cincinnati, Ohio. Trump is campaigning in Ohio ahead of the Republican National Convention in Cleveland next week. (John Sommers II/Getty Images)
2016 race

A poll released by Quinnipiac College shows that Donald Trump has overtaken Hillary Clinton in key swing states after a week of attacks on her integrity following the results of an FBI investigation into her private email server.

The results are within the poll’s stated margin of error of plus or minus 3 points, however it’s a downturn for Hillary Clinton in Florida. In the last Quinnipiac poll in June she held an 8-point lead over Trump in Florida—47 to 39 percent.

The polls have bucked the Clinton campaign into overdrive, with a resolved effort to continue working hard in the battleground states.

“We know the battlegrounds are going to be close til the end. That’s why we need to keep working so hard,” Clinton’s press secretary, Chris Fallon tweeted. “Trump is a serious danger, folks.”

We know the battlegrounds are going to be close til the end. That’s why we need to keep working so hard. Trump is a serious danger, folks.

Trump tweeted the results of the poll, including a picture of the poll results showing him polling ahead of Clinton by a larger margin when asked who is more effective against the ISIS terrorist group.

Thank you Florida, Ohio, and Pennsylvania! #CrookedHillary is not qualified. #ImWithYou pic.twitter.com/M1yzgyeEdY

However, when it came to who is better prepared to be President, Clinton outscored Trump by wide margins. In Florida, 53 percent to 37 percent; in Ohio, 57 to 34 percent; and in Pennsylvania, 56 percent to 36 percent.

The importance of these three states has larger implications to the general election. No presidential candidate has won an election since 1960 without winning at least 2 of these 3 states.

Florida, in particular, is a notorious swing state which decided the outcome of the election in 2000 when there was a long recount process that ended in George W. Bush winning the presidency against then-Vice President Al Gore.