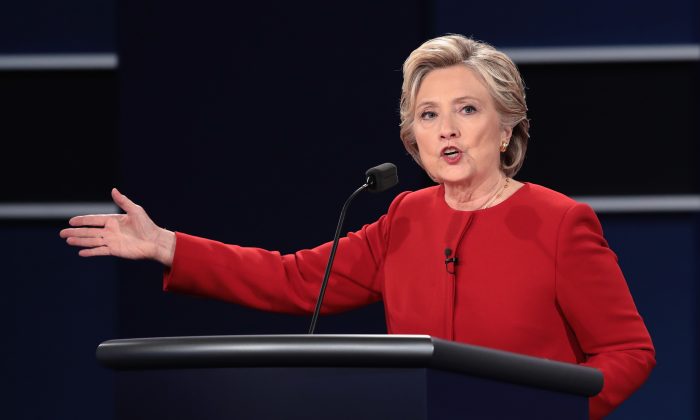 However, the impact of the favorable debate was relatively small. In a four-way matchup, Clinton showed a 3 percent lead over Trump (41 percent to 38 percent). In the same poll taken before the debate, it showed Trump ahead of Clinton by 1 percent.

About 9 percent of those surveyed said that their minds were changed after watching the debate while 81 percent held the same opinion as before the debate.

Obama Says Third Party Vote Is a Vote for Trump

The poll also showed 72 percent of people watched the debate while 27 percent of the 1,326 respondents did not. The latter number mirrors the amount of voters who had no opinion—26 percent.

The same poll gave favorable marks for moderator Lester Holt—42% of respondents said Holt was impartial. 27% said he was more favorable to Clinton and 2% said he favored Trump.

“I’d give him a ‘C,’ ‘C+’,” Trump said on Fox and Friends Tuesday morning. “I thought he was okay, I thought he was fine. Nothing outstanding. He gave me very unfair questions at the end, the last three or four questions. But I’m not complaining about that.”

The debate was the most watched presidential debate of all time. Nielsen Holdings PLC, a global information and statistics company, said that approximately 84 million viewers on 13 major networks tuned in to watch the debate. This estimate did not count people watching at parties, bars, offices, or on C-SPAN.

Of the 72 percent of people in the Politico/Morning Consultant poll that watched the debate, more than half (55 percent) said they watched the entire debate, while another 44 percent saying they watched most or some of it.

A majority of voters found the debate informative (55 percent) and entertaining (62 percent). Half of voters said it was something they would watch again, and more than one-third (37 percent) said it would help them make up their mind.