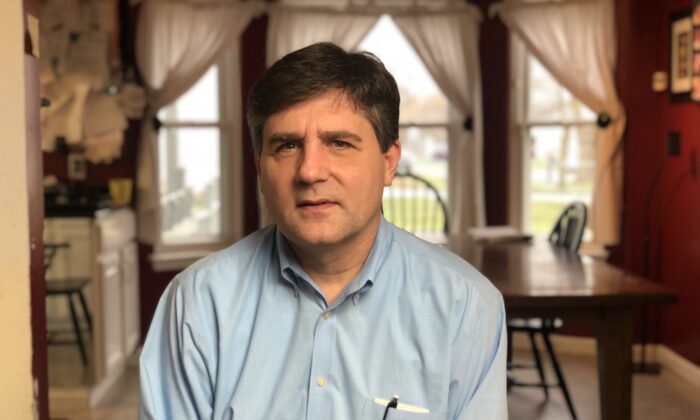 DETROIT—An information technology contractor for Dominion Voting Systems who worked at the TCF Center in Michigan and a former state senator who was a poll challenger both say that the voting machines used in the Nov. 3 election were connected to the internet.

Melissa Carone—a freelance IT worker who submitted a sworn affidavit on Nov. 10 detailing a barrage of what she called fraudulent actions during her time at the voting center—said she was called on Nov. 2 into a hotel in Allen Park, where the entire Dominion team was staying in order to attend a sort of training.

In that hotel conference room, there was a tabulator and an adjudication machine the team was able to look at, to become familiar with the equipment. Carone said a Dominion manager (the man who initially contacted her for the position) talked for about an hour, explaining to the team where they were going to be assigned for the election.

“They gave us a binder that they told us to go through, which actually was very beneficial to me and a lot of the attorneys because it gave a lot of information regarding their software and image cast and how, yes, the machines were connected to the Wi-Fi. Absolutely,” she told The Epoch Times. “It even says it in there.”

In the bottom right-hand corner of the computers used to tabulate and adjudicate ballots, there is a Wi-Fi signal icon, but it doesn’t show unless a computer mouse is hovered over the icon, if the machines are connected to the World Wide Web or if they’re just connected to a network, Carone said. She wasn’t allowed access to it, she said.

Voting machines connected to the internet are particularly vulnerable to hackers, especially by agents of malicious actors, such as China and Iran.

According to a 2020 fact sheet published by the Michigan Bureau of Elections: “Voting machines cannot be connected to the internet during ballot tabulation.” But the bureau states that after counting is finished and a paper record is generated, some jurisdictions “connect the machines to the internet to send unofficial results to the county clerk.”

“In the manual that they provided me with, it says to make sure that every tabulating machine is connected via Ethernet cable,” Carone said.

Carone’s affidavit was submitted as a supplement to a lawsuit in Michigan. The suit was brought in early November by the Great Lakes Justice Center on behalf of Cheryl Costantino and Edward McCall. The plaintiffs allege that because of multiple irregularities, the election in Wayne County should be voided.

Carone’s main role was to assist Dominion with IT work: inspecting the tabulators or adjudication machines and to help anybody who needed it. She would often open the tabulators to fix any paper jams or other issues with the machine.

Patrick Colbeck, a former state senator, aerospace engineer, and a poll challenger at the TCF center in Detroit, said in a sworn affidavit that the machines appeared to have been connected to the internet. Colbeck said the area had wireless routers set up with networks called “CPSStaff” and “AV Counter” broadcast in the area.

All it takes to confirm the connectivity status of a Windows computer “is to roll the cursor over the LAN connection icon in the bottom right corner of the display. When there is no internet connection, a unique icon showing a cross-hatched globe appears. I proceeded to review the terminal screens for the Tabulator and Adjudicator computers and I observed the icon that indicates internet connection on each terminal,” according to Colbeck’s affidavit.

Colbeck said he later approached some of the election officials at the center and told them they could dispel his concerns by simply moving their mouse over the icon and that a pop up would appear indicating if the computer was connected to the internet.

The officials wouldn’t move their mouse for him, Colbeck said. They told him to trust their word.

Colbeck said a number of different affidavits have been submitted detailing some of the “weird things happening on the network.” He said there were outages and error messages.

“The errors that popped up on the computers with the tabulators and adjudicators was something called backup overflow,” he said. “That’s not a standard Windows error message. Where you do see that error message is when you’re trying to backup to a SQL database. Now, either each one of these tabulators had their own SQL database built into that workstation, or they’re trying to connect to some outside database that was not local at that workstation.”

On Election Day and the day after, Carone said she also witnessed many workers rescanning batches of mail-in-ballots at the TCF Center without disregarding them first, resulting in the ballots being counted four to five times in some instances.

Workers were handed a batch of around 50 mail-in ballots at a time that they would run through tabulators, which would often get jammed.

“I witnessed countless workers rescanning the batches without discarding them first, which resulted in ballots being counted 4-5 times,” Carone said in her affidavit.

When she raised her concerns to a Dominion manager, he told her: “Melissa, I don’t want to hear it. We are here to assist with IT, we are not here to run their election.”

Carone said the adjudication process normally involves both a Republican and a Democrat judging the ballots, but during a night shift, she overheard two women talking about their political party—they were both Democrats and they decided to sit together.

“There was no oversight,” she said. “Nobody asking them any questions. It was just a free-for-all.”

Carone said she will soon submit a second sworn affidavit containing information she says will “shine a lot of light on this and how it happened.” She has since contacted the FBI on two occasions, in one instance, speaking with a woman for over an hour, but the bureau never called her back or followed up with her after receiving her information.

Carone said Dominion machines “absolutely” had the capacity to switch votes. In her affidavit, she mentioned Dominion employees talking to each other about a data loss and that they “all got on their phones and stepped to the side of the stage.”

Dominion didn’t immediately respond to an emailed request by The Epoch Times for comment on this article. On its website, the company categorically denies what it describes as “false assertions about vote switching and software issues” with their systems.

“I was told [by Dominion] not to talk to them, not to answer any questions,” she said. “They were just treating them awfully, very rude.”

At one point during the night, steel ballot boxes were placed behind the poll counters.

“They were trying to create a barricade between the poll challengers and the counters,” she said. “As the night went on, more ballots got put into these boxes and they would start stacking them, creating a higher barricade.”

Carone said in her affidavit that she was the only Republican working for Dominion in Detroit. She described the atmosphere in the center as “very tense.”

“Dominion employees and the city workers were making comments about people that had any kind of an American flag on their attire, that they were automatically deemed Trump supporters,” she said. “They were just making comments saying how disgusting Trump is.

“I just started acting like I was a Democrat because I didn’t want them to even get suspicious of it,” she said. “I was just nervous, you know?”

During her first 24-hour shift, she said she didn’t see a single ballot for Trump. The next day, she did witness some.

Carone says she has no faith in the integrity of Dominion’s software or tabulating process. Dominion hasn’t contacted her about the contents of her affidavit or of her allegations.