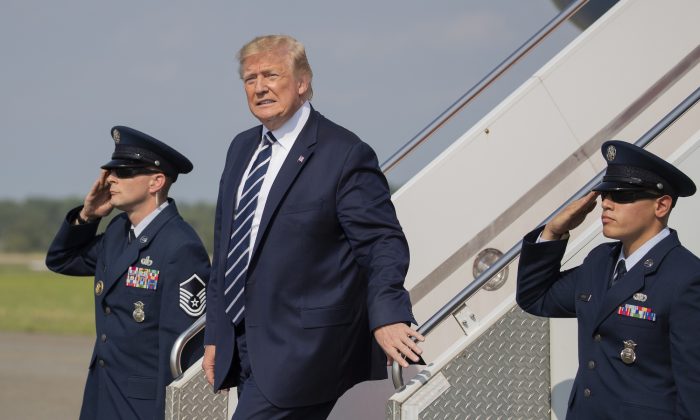 Poll: 54 Percent of Americans in the South Approve of President Trump

A new poll has found that 54 percent of Americans in the south approve the way President Donald Trump is handling his job as the country’s commander-in-chief.

According to the recent NBC News|SurveyMonkey online poll (pdf), conducted between July 2 and 16, 38 percent of Americans in the south “strongly approve” of Trump’s job as president, while 16 percent expressed that they “somewhat approve” his handling of the job. This is up from a total approval of 52 percent based on the same poll conducted in September last year.

According to NBC News, much of the poll was conducted prior to Trump writing a series of  Twitter posts between July 14 and 16 which ignited outrage, especially among Democrats. Most notably, Trump called on “‘progressive’ Democrat Congresswomen” to “go back” to their countries to help fix the “totally broken and crime-infested places” before returning to the United States to “show us how it is done.”

….and viciously telling the people of the United States, the greatest and most powerful Nation on earth, how our government is to be run. Why don’t they go back and help fix the totally broken and crime infested places from which they came. Then come back and show us how….

The posts eventually sparked a public feud between the president and four far-left members of the Democratic party—Reps. Alexandria Ocasio-Cortez (D-N.Y.), Ilhan Omar (D-Minn.), Rashida Tlaib (D-Mich.), and Ayanna Pressley (D-Mass.). Apart from Omar, who was born in Somalia, the other three lawmakers were born in the United States.

The polling data also found that a majority of respondents expressed disapproval of the way Congress was handling its job.

This poll comes after a recent Reuters-Ipsos public opinion poll found that Trump’s net approval among members of the Republican Party rose by 5 percentage points to 72 percent, compared with a similar poll that ran last week.

The remaining 13 percent said they were “bad” or “terrible.”

The NBC News|SurveyMonkey Southern regional poll was conducted with people living in Alabama, Arkansas, Florida, Georgia, Louisiana, Mississippi, North Carolina, South Carolina, Tennessee, Texas, or Virginia. Among the sample were 4,869 adults ages 18 and over, including 4,203 registered voters. The error estimate is plus or minus 2.3 percentage points.

Trump Thanks Progressive Dems for Uptick in Poll

On July 17, Trump thanked several “progressive” Democratic congresswomen who he called out in a series of Twitter posts after a latest Rasmussen poll showed a four-point jump in his approval ratings.

According to the Rasmussen Poll, which Trump often cites, the president’s approval went up from 46 percent on July 15 to 50 percent on July 17, days after he accused four far-left members of the Democratic party of displaying anti-semitic and anti-American rhetoric.