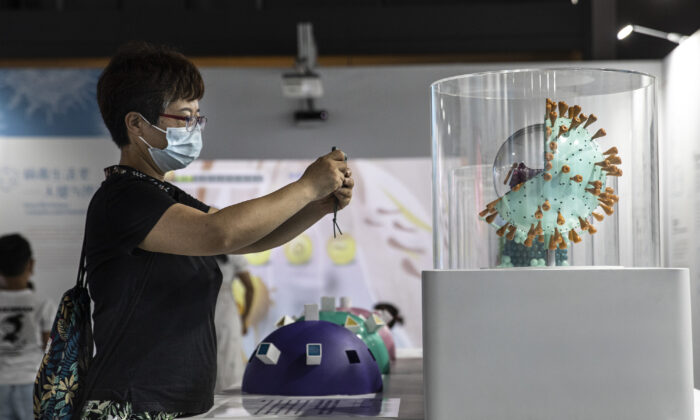 A woman wears a mask while taking pictures of the COVID-19 virus model on display at the “Enlightenment of COVID-19” science exhibition in Wuhan Natural History Museum, in Wuhan, Hubei Province, China, on July 18, 2021. (Getty Images)
Viewpoints

Politicizing COVID-19 From the Start

From the moment COVID-19 appeared, the pandemic became inseparable from politics.

Political frenzy was inevitable, since the SARS-CoV-2 virus may have escaped from a level-4 security virology lab in Wuhan, China.

The rapid-fire spread soon threatened to indict the Chinese communist government for nearly destroying the world economy and killing millions.

Western elites, in response, feared that their own lucrative investments in China would be jeopardized by such disclosures—and acted accordingly in defending Beijing.

Nonetheless, one scenario that remains intriguing is that the escaped virus was birthed by gain-of-function research scientists, overseen by elements of the Chinese communist military. Worse, the lab was given subsidies by U.S. health authorities, routed through third parties. Hiding all of that damaging information warped government policy and media coverage.

Belatedly, a panicked China shut down all domestic travel in and out of Wuhan—but not flights abroad to Western Europe and the United States.

The rest is history.

From the outset, the World Health Organization simply spread false talking points about the outbreak from the Chinese government, delaying a robust global response.

President Donald Trump’s political opponents initially told Americans to shop and travel as usual. Then came a sharp pivot as cases mounted, and they blamed the president.

The U.S. 2020 ban on travel from China was met with charges of racism and xenophobia from presidential candidates. Ironically, many were simply channeling racist and xenophobic China’s propaganda.

Many doctors kept hammering the need for therapeutics, including taboo off-label use of cheap generic drugs. The use of hydroxychloroquine and ivermectin was widely ridiculed, despite continuing studies from abroad attesting to their usefulness.

Trump’s Operation Warp Speed project to develop vaccinations was also pilloried. Candidates Kamala Harris and Joe Biden did their best to talk down the safety of the impending inoculations. But once in power, they projected their own prior harmful rhetoric onto so-called “anti-vaxxers.”

Then they claimed credit for the initial success of the Trump vaccinations.

Pfizer had promised a major preelection announcement about its likely rollout of a vaccine in October, just days before the 2020 election. Then, mysteriously, Pfizer claimed the vaccine, in fact, wouldn’t be ready before Nov. 3. A few days after the election of Biden, the company reversed course and announced the vaccinations would soon be available.

Cuomo’s policies of steering infected patients into long-term-care facilities doomed over 10,000 of the elderly. Now New York is illegally using race to grant preferences in the allotments of tests and new drugs.

The rhetoric of the media-progressive nexus that mandatory, massive lockdowns were necessary all but destroyed a booming Trump economy and denied critical medical care to millions. Emphasizing therapeutics, natural herd immunity, and the resilience of the youth to the disease were all pronounced “anti-science” by the demagogues on the left.

Various celebrities and politicos—such as California Gov. Gavin Newsom and failed presidential candidate Hillary Clinton—boasted the pandemic lockdown offered the perfect crisis that must not go to waste politically. Actress Jane Fonda even crowed that COVID-19 was a “gift from God to the left” in helping to end Donald Trump.

In the waning days of the 2020 campaign, Biden went so far as to blame Trump personally for all the deaths from the virus.

Once the vaccinations had seemed to work in early 2021, an upbeat Biden boasted that he would end the virus by summer 2021, by following “the science.” He went so far as to claim that no one had been vaccinated prior to his inauguration, even though 17 million, including Biden himself, had been.

Then Nemesis answered such hubris.

The unforeseen Delta and Omicron variants hit. A new phrase, “breakthrough case,” revealed that the vaccinations often could only prevent serious illness, but not infection or infectiousness.

Suddenly, the best and brightest people with three shots, who had blasted the red-state rubes as the ignorant un-vaxxed—got sick. More have now died from the virus on Biden’s watch than on Trump’s.

In reaction, the left now calls for realism, emphasis on treatments, and acknowledgment of the value of natural immunities. It’s even newly curious about the origins of the virus, and the need to “get back to normal.”

We’re suddenly told that thousands died “with” rather than “because of” COVID—the exact opposite of what we heard in the Trump era.

A skeptic might suggest that terror over the impending midterms finally made the left face reality.

Politicizing the pandemic is a euphemism. In truth, thousands of Americans have died needlessly because of weaponized disinformation about China’s culpability, vaccines, useful drugs, lockdowns, racial preferences, and long-care facilities.