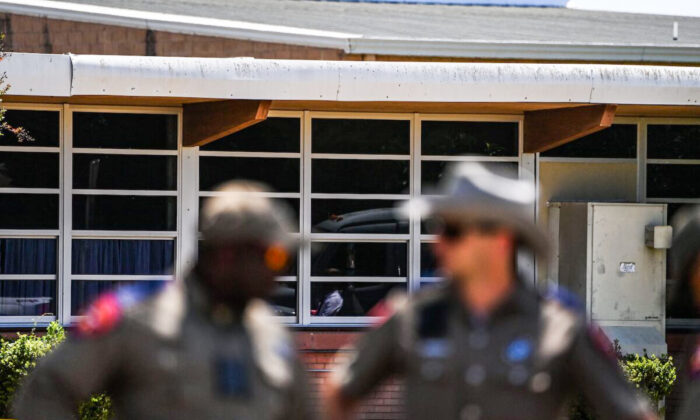 Police officers stand outside the Robb Elementary School in Uvalde, Texas, on May 25, 2022, after a teen in body armor marched into the school and killed 19 children and two teachers. (Chandan Khanna/AFP via Getty Images)
US News

Officers Waited to Engage Texas School Shooter Because ‘They Could Have Been Shot’: Official

A Texas Department of Public Safety (DPS) official has said officers “could have been shot” if they engaged the gunman holed up with his victims in a classroom at Robb Elementary School before a specialist tactical team arrived.

Authorities on Thursday sketched out a timeline of events from when 18-year-old Salvador Ramos crashed his vehicle to when he entered the Texas school at around 11.40 a.m. and slaughtered 19 students and two teachers.

But it wasn’t until almost 1 p.m. that Ramos had been killed and the siege was over, around 90 minutes later.

Questions have been raised amid mounting public anger and scrutiny about the response of law enforcement as more details emerge about the timeline of events.

Texas DPS spokesman Lt. Chris Olivarez said the first priority for officers in an active shooter situation is to stop the killing and preserve life.

“But also one thing that, of course, the American people need to understand, is that officers are making entry into this building. They do not know where the gunman is,” Oliverez told CNN.

Oliverez said their response meant the shooter was contained in the classroom and unable to get to “any other portions of the school to commit any other killings.”

Once the tactical team from U.S. Border Patrol arrived, he said they used a ballistic shield for cover as they entered the classroom and killed the shooter.

Authorities on Thursday largely ignored questions during a contentious briefing about why officers had not been able to stop the shooter sooner.

Victor Escalon, regional director for the Texas Department of Public Safety, told reporters he had “taken all those questions into consideration” and would offer updates later.

One point Escalon clarified based on the information he had at the time was that there were no armed officers at the school at the time Ramos entered “unobstructed.”

“No, no, there was not an officer readily available, armed. No,” the Texas DPS official said in response to a reporter’s question on Thursday afternoon.

This contradicted earlier information from authorities.