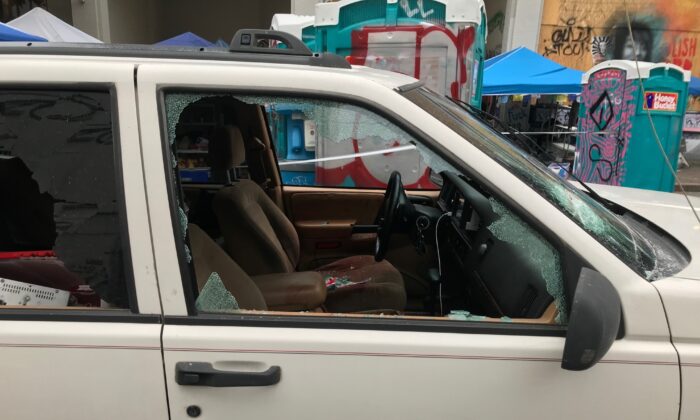 “It is chaotic. It’s lawless. I think that the governor of the state of Washington needs to intervene here,” Solan said in an interview with The Epoch Times at his office.

“How can we go into an area where there’s armed people, where we already know there’s been shootings. How can we know that it would be safe for officers to into the area?” he added.

A 16-year-old was fatally shot in an SUV at the edge of the zone early Monday, just hours before the interview. Another teenager riding in the vehicle was rushed to the hospital, where he remains.

It was the fourth shooting in about a week in or near the area.

Occupiers are refusing to leave until their demands are met. Rooks, who said he’s a leader of the occupiers, told The Epoch Times last week that three of the big demands are: defund the police department by 50 percent, set aside land for the black community, and free every one who was arrested during protests.

“The people are ready to stand in peace and protest,” he said. “But they are not ready to let this go until the demands are met. Give us what we want and we’ll go.”

Personally, he said, he feels the city should meet at least one of their demands, the request to be given land.

Mayor Jenny Durkan, a Democrat, is refusing to use force to disperse the activists, even as Police Chief Carmen Best told reporters: “It is absolutely irresponsible for this to continue.”

“It’s unfortunate that we have yet another murder in this area identified as the CHOP. Two African-American men dead at a place that they claim to be working for ‘Black Lives Matter.’ But they’re gone, they’re dead now,” Best said while standing inside the zone on Monday.

“And we’ve had multiple other incidents: assaults, rape, robbery, and shootings, and so this is something that’s going to need to change.”

Best struggled to speak at times as activists shouted at her and used a device to make a sound similar to a siren.

A spokesman for Durkan told The Epoch Times that she and Best have been meeting regularly regarding the situation at CHOP.

The message of demonstrators in the area “has been undermined by violence,” the statement said.

“The area has increasingly attracted more individuals bent on division and violence, and it is risking the lives of individuals. There has been unacceptable behavior by individuals who are preventing city employees from doing their job.”

The city has been working to disperse people from the area. Hundreds have left, though dozens remains, according to the mayor’s office.

Inquiries sent to the offices of Inslee and councilwoman Kshama Sawant, a self-described socialist who represents the area, went unanswered.

Sawant, in a statement on social media, said the latest killing at the zone “underscores the urgency to Defund police by at least 50 percent, win the strongest possible Amazon Tax this week to fund housing & jobs, release protesters without charges, and winning the other demands put forward by the movement.”

Solan, the police union president, challenged calls to defund the police, saying training is the first thing that’s cut when the budget is slashed.

He sees CHOP as “the blueprint for what could occur across this city, if you drastically cut police funding, police services.”

The people protesting included criminal agitators that hurled projectiles, including frozen water bottles, at police officers, Solan said. He called for the release of body camera footage from officers who were there as well as closed circuit footage from the precinct.

The police officer expressed amazement at the weekslong occupation of multiple blocks in an American city.

Durkan promised to dismantle the occupation last week. City workers who went to remove barriers faced resistance on Friday so they left without doing so.

A member of the zone’s security force told The Epoch Times that other occupiers have said there will be repercussions if police officers re-enter the abandoned precinct.