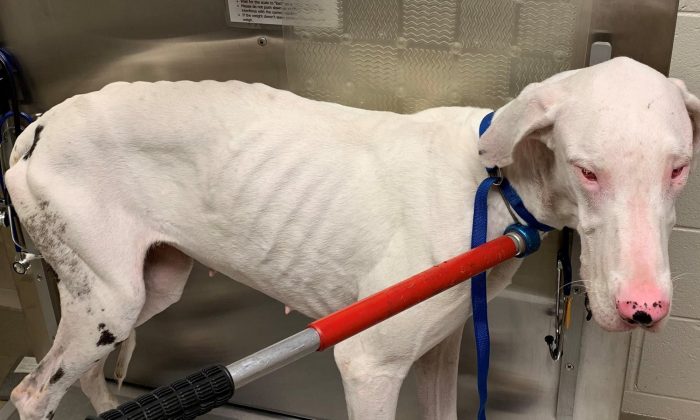 Police Save 32 Great Danes, Some in ‘Near-Death’ Conditions, From Virginia Home

Police found 32 Great Dane dogs in deplorable conditions in a Virginia home late August and brought the starving canines, some of whom were “near death,” to safety.

“The condition of the 20 adult dogs and 12 puppies rescued ranged from poor to near death,” King and Queen County Sheriff’s Office said in a statement Sept. 9.

The rescue came after deputies carried out a search warrant on Aug. 27 at a home on Owens Mill Road in St. Stephens Church.

“Five of the dogs were discovered barricaded inside a small, dilapidated camper. Both the camper and the dogs were covered in feces and urine,” police described in their statement.

“There was no food or water in the camper,” police said, adding that the camper had no ventilation and the temperature inside was “extreme.”

Police added that conditions inside the house were so poor that the state Health Department and County Zoning Office were called in. The two agencies flagged several health, safety, and zoning issues in the home.

Awlasewicz is the owner of a company called 101danes, police said. The company’s website and Instagram account feature photos of the Great Danes in roles as service dogs in the community.

On Sept. 6 at an arraignment, Awlasewicz “made unsubstantiated claims that two of the dogs seized are service dogs” for the couple, and his attorney asked that they be returned.

A judge denied that request and a hearing has been set for Sept. 20, to decide whether the seized dogs will be returned to Awlasewicz and Wheat.

Meanwhile, the Great Danes were taken to the King William Regional Animal Shelter.

“Thanks to the immediate veterinary care and the outstanding attention and care the dogs are receiving from the staff at the King William Regional Animal Shelter, it is apparent that most of the dogs’ conditions are improving daily,” police said in a statement.

On Facebook, people commented on the rescue expressing dismay at the extent of the situation.

“I pray that these dogs, even the 2 so-called service dogs are not returned to the owners, there is no way they are capable of caring for any pet as it should be cared for,” one person commented.

Many people commented saying that Awlasewicz and Wheat appeared to be the same couple that would frequent their local stores in Tappahannock, accompanied by one or two Great Danes. Some noted that the dogs “stunk terribly.”

One person asked: “How could this have been allowed? Who doesn’t notice that many dogs and obvious continued breeding? They should go to jail on counts of animal cruelty for each dog abused or neglected. Other people knew and didn’t say a word.”

“Well a lot of people knew them or of them and was only aware of 2 dogs that [were] in OK shape they brought them out in public… had no idea about the others hints as in why they were covered in poop because they were never let out,” one person responded.

There are a number of ways to report suspected animal abuse cases. The best way is reporting suspected cruelty to local law enforcement agencies, humane organizations, animal control, or an animal shelter.

“A concise, written, factual statement of what you observed—giving dates and approximate times whenever possible—to provide to law enforcement,” the ASPCA says on its website.

“If you can, provide law enforcement with the names and contact information of other people who have firsthand information about the abusive situation,” the website says.

“It is possible to file an anonymous report, but please consider providing your information. The case is more likely to be pursued when there are credible witnesses willing to stand behind the report and, if necessary, testify in court.”