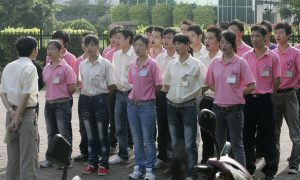 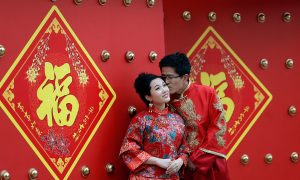 Within Five Years, It'll Be Hard to Find Workers, Wives, and Welfare in China
0 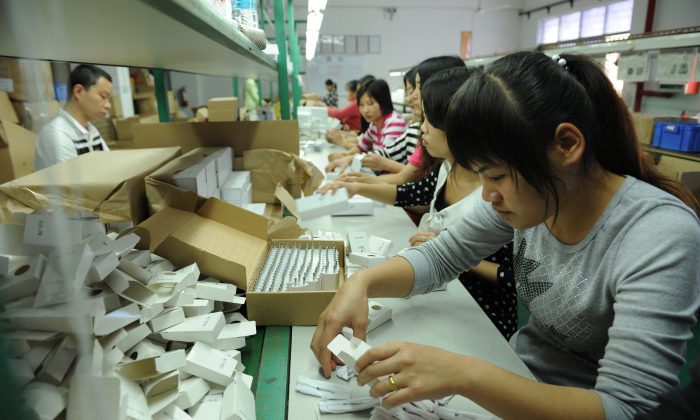 Chinese authorities recently detained over 20 labor activists working for four nongovernmental organizations in the southern province of Guangdong, accusing them of fanning tensions between unpaid workers and employers. According to Amnesty International, seven people are still in custody.

The arrests of NGO staff and administrators come as a reaction from local authorities concerned about the role they may play in organizing Chinese workers.

Prominent individuals arrested include, on Dec. 4, He Xiaobo, director of the Nanfeiyan Community Workers’ Group, who was charged with “abuse” of his position and “embezzling public funds.” He was denied a lawyer and is being held at the Nanhai District Detention Center in the city of Foshan.

Zeng Feiyang, director of the Panyu Workers’ Group, was detained in the same police action on the grounds that he had “gathered crowds to disturb social order.” He is being held at a detention center in Guangzhou, provincial capital of Guangdong.

Zhu Xiaomei, a young woman working for He’s NGO, was still nursing her 1-year-old daughter when she was arrested. Police have not yet permitted her to resume breastfeeding.

The whereabouts of four other activists remain unknown, while a number of the others, though not the prominent individuals mentioned above, were released.

Guo Yuhua, a sociology professor at Beijing’s Tsinghua University, told the Hong Kong-based Ming Pao newspaper that employers have the support of the authorities, putting workers in an extremely vulnerable situation.

Economic slowdown in Guangdong Province, which for years had enjoyed cheap labor-based industrial growth, has translated into the relocation or closure of factories. This has triggered unrest among large numbers of workers who remain unpaid, according to China Labor Bulletin, a Hong Kong-based NGO.

According to the Bulletin’s Strike Map, the number of protests and strikes in Guangdong has doubled, from 23 in July to 56 in November.

Chinese legislation for protecting workers has been poorly implemented. The All-China Federation of Trade Unions, which operates under the auspices of the Chinese state, is the only lawful representative of workers, but the national organization is widely seen as ineffectual or even complicit in the interests of factory employers and management.

The past decade has seen the rise of labor-centric NGOs that act as unofficial unions. By providing legal education and mediation to solve disputes, these organizations provide a civil outlet for workers’ concerns and frustrations.

We will get 10 people and kidnap the factory boss, we’ll bring him to a cave and the negotiations will become much easier!
— Chinese factory worker

Zeng Feiyang’s Panyu Workers’ Group effectively resolved labor disputes at the Lide shoe factory last December. The NGO assisted workers with representation and contract negotiations with their employers. In less than a month, the factory began to cover social insurance of workers. This included 2,000 yuan (about $300) for annual leave, compensation for high temperatures, and overtime pay.

Tang Qinghong, a workers’ representative, told Financial Times Chinese that they “would have gotten nowhere without the instruction of Panyu Workers’ Group.”

Before the involvement of NGOs, Meng Han, a staff member at Panyu, told FT Chinese that a young man had once contemplated abducting his employer to force concessions.

“We will get 10 people and kidnap the factory boss, we’ll bring him to a cave and the negotiations will become much easier!”

The Gray Zone of Unofficial Labor

While local Chinese authorities have demonstrated some appreciation for the work done by labor NGOs in easing worker–employer tensions, the unofficial organizations continue to face harassment, economic limitations, and legal barriers.

But last year, Zeng was barred from traveling between Hong Kong and mainland China. This December, he was prevented from attending a human rights conference in the Czech Republic.

When he sent a message on social media to a friend relaying support from peers, over 10 police officers broke into his flat and detained him for a day.

This January, provincial authorities in Guangzhou implemented regulations requiring NGOs to have written approval from the relevant government bodies at least 15 days before accepting foreign capital—a significant source of funding for many NGOs.

Guo Yuhua, the Tsinghua professor interviewed by Ming Pao, said that NGOs have “very limited space and are under high pressure.”

“Previously, NGOs involved in education, environmental affairs, or in poverty alleviation were better off, but now it’s getting worse.”