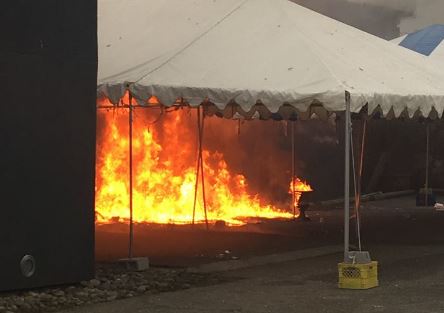 (Vancouver Art and Leisure)
US

Police in Canada are hunting for an arsonist who has been targeting portable bathrooms in Vancouver.

Seven fires had been lit in the late evening or early morning hours, between Dec. 9 and Jan. 19, police said.

The police said in a news release that people using the porta-potties in the downtown area should be cautious and report any suspicious activity.

Also, anyone with a porta-potty on their property is advised to move it away from buildings, as some of the fires have spread to nearby structures.

They are also asked to lock the porta-potties overnight.

One of the places the arsonist hit was the Vancouver Art and Leisure.

The organization said on Facebook that it was hit on Jan. 4.

The burning fire spread to the building, causing interior damage.

Today in Headlines I Never Thought I'd write… https://t.co/BOBIo3p4gu

#natsec Police on the hunt for serial porta-potty arsonist – Canadian authorities are hunting the person responsible for a rash of fires targeting portable bathrooms in downtown Vancouver. https://t.co/UgG7SzVYuD

“We do not know what the motive for this senseless act may have been but it is not our first adversity and we hope to recover,” the group said.

Upcoming events at the space were postponed while the staff and artists set to work restoring the building.

“There’s some substantial damage to the contents and some damage to the structure,” David Boone, assistant chief of operations told CBC.

The group is fundraising to help restore the building and contents.

Sgt. Jason Robillard told the Vancouver Sun that the value of a single porta-potty is $1,200.