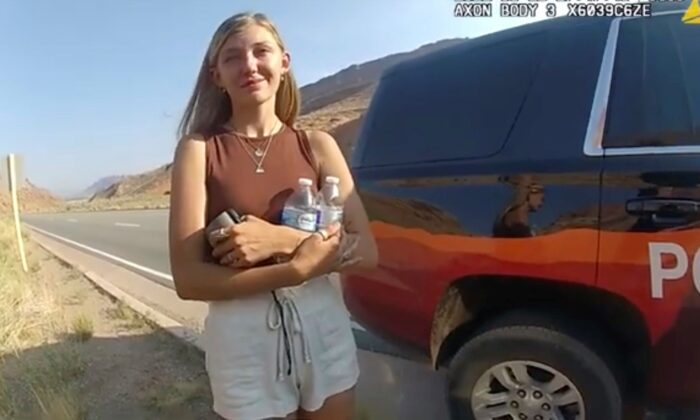 Police officers who stopped a vehicle containing Gabby Petito and Brian Laundrie several days before Petito disappeared made “unintentional mistakes,” according to a newly released review of the Aug. 12, 2021, stop.

Ratcliffe found (pdf) that officers Eric Pratt and Daniel Robbins, who responded to a 911 call about a domestic dispute, didn’t classify the incident correctly and that the reports they submitted on it did not contain enough details.

The officers pulled over the van Laundrie was driving near Arches National Park after dispatchers received a call that a man was “slapping the girl” before they entered the vehicle. Laundrie went over the double yellow line in the road, according to police reports.

Laundrie told officers he’d been drinking and gotten into a “little squabble” with Petito, with whom he resided and to whom he was engaged. Laundrie admitted pushing Petito and that she then hit him. He said he suffered an injury near his eye.

Petito, who was crying, told officers that she and Laundrie had been fighting over “personal issues.” She said she had not been drinking and that Laundrie had locked her out of the van. She said they were “fighting all morning” and said injuries she suffered were from an altercation that she said she started.

The officers separated the couple, letting Petito drive the van away while one took Laundrie to a motel.

They classified the incident as an assault. The review found it should have been classified as a domestic violence investigation, given Petito and Laundrie were cohabitants and engaged.

Ratcliffe said officers had probable cause for an arrest and should have arrested Petito on a charge of assault. While there were indications Laundrie assaulted his fiancee, her statements “make it extremely difficult, if not impossible, to substantiate a charge against Brian as it relates to this incident,” Ratcliffe said.

Petitio was later found dead at Bridger-Teton National Forest. Her cause of death was ruled strangulation. Laundrie was found dead by suicide in Florida.

Moab City said in response to the review that the officers who responded to the stop “made several unintentional mistakes that stemmed from the fact that officers failed to cite Ms. Petito for domestic violence.”