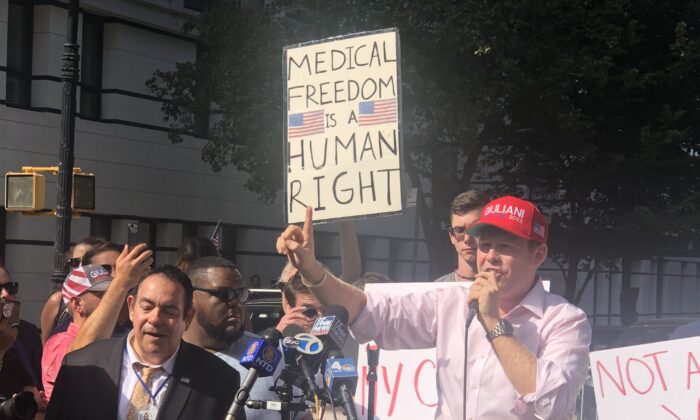 A group of 118 police officers, firefighters, and other city employees have banded together to form the City of Raleigh Freedom to Choose (CRFC) coalition to challenge the city’s vaccine mandates for employees.

CRFC is represented by James Lawrence of Envisage Law.

In an Oct. 11 letter addressed to Raleigh Mayor Mary-Ann Baldwin and other city officials, Lawrence gave a deadline of Oct. 23 for the city to respond to a request for the mandate to be lifted or revised, or face litigation.

The mandate itself “suffers from a variety of procedural, statutory, and constitutional problems,” Lawrence said, citing discrimination between the vaccinated and the unvaccinated as its predominant issue.

Lawrence referred to a January city ordinance the Raleigh City Council enacted that stated the city “will not tolerate illegal discrimination and encourages its corporate community partners to oppose discrimination in all forms.”

On Sept. 17, the city began requiring its employees to be vaccinated from the CCP (Chinese Community Party) virus or be subjected to weekly testing until Wake County’s positivity rate is less than 5 percent and there is “no significant or high community transmission.”

The city offered $250 and two days of bonus leave to employees who were vaccinated by the city’s deadline.

Unvaccinated employees who undergo weekly testing are not eligible for promotion unless they get vaccinated by Dec. 31.

Seventy-eight percent of the 4,000 city employees are vaccinated.

Since there is no written policy on the mandate, Lawrence said he had to construct the details from a review of a list of Frequently Asked Questions (FAQ), in which he found three areas of discrimination: testing, pay and leave, and career development.

“At the same time, the city appears to dismiss natural immunity to COVID-19,” he said.

Employees who have recovered from COVID-19 must be tested weekly, while vaccinated employees, even if those employees lack antibodies, aren’t required to be tested, he said.

The $250 bonus with two days of paid leave for the vaccinated but not the vaccinated and the denial of promotions to unvaccinated employees is also discriminatory, Lawrence said.

Of the inconsistencies, Lawrence questioned the city’s “progressive discipline” policy of requiring an unvaccinated employee to continue to report to work for five weeks even if he or she refuses the weekly testing.

In its FAQ, the intent is “to provide an opportunity to correct behaviors or performance.”

“The city’s justification for this policy is noteworthy,” Lawrence said. “The city does not muster a shred of science or data in support of it. What the city offers instead is its bald, unreasoned expectation that employees will either get vaccinated or submit to testing. But that is speculative.”

One must ask, Lawrence said, what is happening during the three weeks before being sent home.

Another defect of the policy, Lawrence said, is its violation of the North Carolina Genetic Information Nondiscrimination Act, which states that an employer can’t “deny or refuse employment to any person or discharge any person from employment on account of the person’s having requested genetic testing or counseling services, or on the basis of genetic information obtained concerning the person or a member of the person’s family.”

The statute defines genetic information as “information about genes, gene products, or inherited characteristics that may derive from an individual or a family member,” Lawrence said.

“Proteins, to include vaccines produced by the COVID-19 vaccines, are ‘gene products,’” Lawrence said. “There is no shortage of scientific authority on this fundamental point of biology.”

Because the city’s mandate is based on if employees have vaccine-induced “gene products,” or spike proteins, Lawrence said that the classification alone is being used to discriminate against the employee based on his or her genetic information.

The mandate also violates a statute that prohibits “constructive discharge” in which an employer creates intolerable conditions for the employee resulting in the employee quitting.

“Here, the city shifts all the cost and burden of testing onto employees, who must get tested on their own time and at their own expense,” Lawrence said. “At the same time, the city also effectively blocks unvaccinated employees from any promotional or advancement opportunities.”

Among others, the mandate also violates the Civil Rights Act, the Fair Labor Standards Act, and it contains “significant state and federal constitutional problems.”

A communications spokesperson for the city of Raleigh said the city won’t comment on the letter.