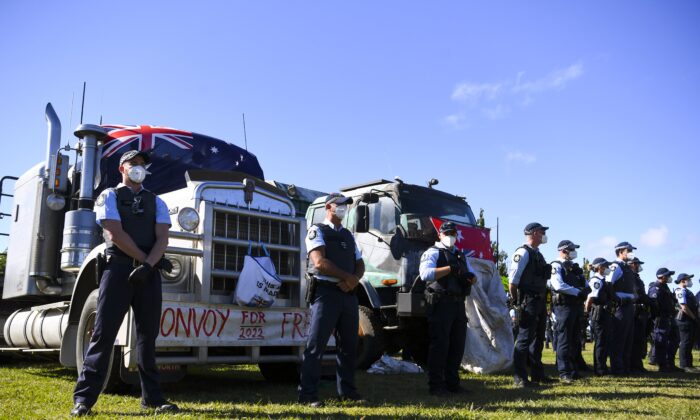 Police officers guard a truck as protesters are being moved on from makeshift camp next to the National Library in Canberra, Australia, on Feb. 4, 2022. A camp of protesters in Canberra has been given a move on order by police. (AAP Image/Lukas Coch)
Australia

Protestors, who mobilised in solidarity with the “Convoy to Ottawa,” have been moved on by police in the Australian capital after they parked their vehicles and set up camp around the National Library.

On Feb. 4, police issued verbal warnings before a move-on order was handed down. The 250 vehicles began leaving the area voluntarily, with one being towed.

Social media has been awash with footage of drivers making their way to the Australian capital.

On Jan. 31, protestors gathered in front of Parliament House, according to videos circulating on social media, where the crowd could be heard chanting, “What do you want? Freedom! When do we want it? Now!”

The following day, they held a rally in front of the National Press Club, where Australian Prime Minister Scott Morrison was speaking, before camping around the National Library.

Police used capsicum spray and made three arrests on Feb. 2, with scuffles breaking out.

“That site was going to be used for events over the weekend and an event tonight,” he told the Australian Broadcasting Corporation on Feb. 4.

“The National Capital Authority has had to cancel that because of the fact that these people are illegally camping, so we are moving them on.”

Protestors are moving to the Exhibition Park in Canberra, according to Telegram posts.

The grassroots movement had begun gathering steam, with a week-old GoFundMe campaign garnering AU$179,764 in donations, as of Feb. 4, before it was frozen by the website.

GoFundMe administrators say they will hold the funds until details are provided on how the organiser plans to disperse them—a similar issue occurred with the Canadian protest, before the CA$4.5 million in funds were released.

In Canada, the movement saw thousands to tens of thousands of truckers mobilise  in response to ongoing vaccine mandates and harsh government-mandated restrictions.

In Australia, mandates have been widely enforced across the country with largely bipartisan support politically, as well as from the business and medical community. It remains a contentious issue, however.

On Jan. 22, protests broke out across Australia’s major capital cities against government-mandated restrictions and mandates.

Prompting vaccine developer Nikolai Petrovsky to criticise the mixed messaging from the government and media on the benefits of the jab.

Petrovsky stressed that vaccines could only protect individuals and did not prevent transmission of the virus—undermining the reasoning for vaccine and booster mandates.

“Every individual should be making decisions about their own health, and it is completely inappropriate to demonise or suggest someone who’s unvaccinated is in any way different to anyone else,” the lead researcher behind Spikogen told The Epoch Times.