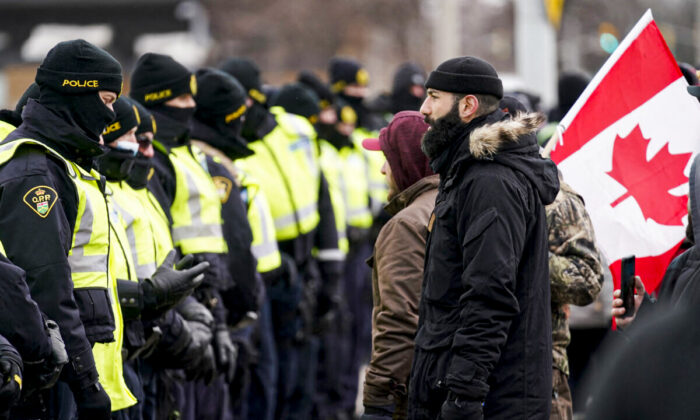 Police gather by the Ambassador Bridge in Windsor, Ont., to clear up a blockade set up by protesters demanding an end to COVID-19 mandates and restrictions, on Feb. 12, 2022. (Geoff Robins/AFP via Getty Images)
Canada

WINDSOR, Ont.—Police moved in to clear the blockade at the Ambassador Bridge border crossing in Windsor, Ont., on Feb. 12.

Heavily armed police came to the site, including officers from the Windsor Police Service, Ontario Provincial Police, RCMP, and others. There are also armoured vehicles and several police cruisers.

Most trucks and other vehicles were cleared from the blockade early in the day, but standoff with protesters on foot continued.

A line of police officers advanced on the protesters around mid-day, pushing them further away from the site of the blockade.

Police said in the afternoon that it had started ticketing and towing vehicles at the protest site.

“Active enforcement in relation to parking in the area of the protest is commencing. Vehicles are being ticketed and towed,” Windsor police said in a tweet around 4:15  p.m.

Some protesters set up blockades on nearby roads, instead of the main road leading to the international bridge, as police don’t let them get on the main roadway to the border.

Protester Domenico Pelle said some demonstrators told the police that even though they may leave today, if the province doesn’t lift its COVID-19 mandates in two days, they’ll be back.

“We’re trying to uphold our Charter of Rights and Freedoms out here,” Pelle, a machinist, said at the site of the protest.

The Windsor Police & its policing partners have commenced enforcement at and near the Ambassador Bridge. We urge all demonstrators to act lawfully & peacefully. Commuters are still being asked to avoid the areas affected by the demonstrations at this time.

On Feb. 11, the Ontario Superior Court granted an injunction to prevent the protesters from blocking the border crossing.  The injunction came into effect at 7 p.m. on Feb. 11, but more protesters came to the site on the evening of Feb. 11.

The number of protesters went down on the morning of Feb. 12. That’s when police started their operation.

“The Windsor Police & its policing partners have commenced enforcement at and near the Ambassador Bridge. We urge all demonstrators to act lawfully & peacefully,” Windsor Police said in a tweet around 8:30 a.m. on Feb. 12. “Commuters are still being asked to avoid the areas affected by the demonstrations at this time.”

Police threatened arrest for those who “are located within the demonstration area.”

The protest is one of several inspired by the truckers’ protests that started against the federal government’s requirement that all truck drivers crossing the Canada-U.S. border need to have COVID-19 vaccination.

Protesters remain in Ottawa, as well as other sites including Canada-U.S. border crossings in Alberta and Manitoba.

On Feb. 11, Ontario Premier Doug Ford announced that the province will be in a state of emergency due to the ongoing protests in Windsor and Ottawa.

Fines for non-compliance will be up to $100,000 and up to a year imprisonment, Ford said, adding that the provincial government will also provide additional authority for the police to take away the personal and commercial licenses of anyone who doesn’t comply with these orders.

Lisa Lin
Follow
Lisa Lin is a reporter based in Windsor, Ont.