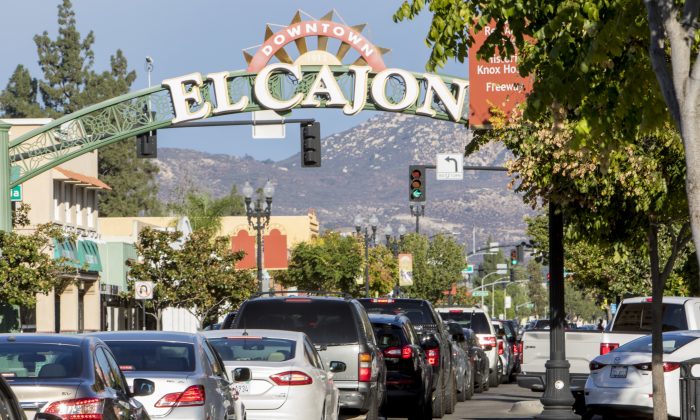 Main Street in the city of El Cajon, Calif., a community east of San Diego, is seen on Sept. 29, 2016. (AP Photo/Don Boomer)
Crime and Incidents

EL CAJON, Calif.—The family of an unarmed black man fatally shot by police is like thousands who have transformed the suburban San Diego city of El Cajon: Refugees from a strife-torn country.

The family of 38-year-old Alfred Olango fled Uganda to a refugee camp and then came to the United States in 1991. On Tuesday, Olango, a father of two girls, was killed by an officer who responded to calls from Olango’s sister saying her brother was acting erratically and wandering into traffic.

He was shot multiple times after police say he pulled something from his pocket that they thought could be a weapon and pointed it at the officer. The object turned out to be a 4-inch electronic cigarette device.

Rally, March in Memory of Man Shot by Police in California

The killing and subsequent angry protests have brought attention to El Cajon, a diverse, largely blue-collar city of 104,000 people that over the past two decades has absorbed a surge of refugees, many from Iraq and more recently from Syria.

Some signs on Main Street—a vibrant mix of furniture stores, clothing shops and restaurants—are in Arabic. Spanish is the primary language for nearly one of every four students in the Cajon Valley Union School District, while Arabic and Chaldean—spoken by Iraqi Christians—is the main language for more than one in 10.

Rob Goss, part-owner of a boxing gym on Main Street and a city resident for more than 10 years, credits Chaldeans for opening markets, gas stations and other businesses that have fueled economic growth.

“We’re still in a curve of trying to get people on their own feet but it’s happening,” said Goss, 47. “They’re adapting.”

The influx has bred some tension. Mayor Mark Lewis was forced to resign in 2013 for derogatory remarks about Chaldeans.

“First time they come over here, it doesn’t take them too long to learn where all the freebies are at,” he said and then later apologized.

David Carter, a 64-year-old former construction worker who moved from Northern California four years ago to join his sister, is bothered by the subsidies that refugees receive while he struggles with cuts to government-funded health benefits that cover prescription drug, dental and other services.

“I don’t resent the people but I resent what the government has allowed them,” Carter said while relaxing outside the public library. “Our ancestors had to bust their butts to get anything. That’s the American dream.”

Jaffar Rahem, a 27-year-old Iraqi who works at Wal-Mart, said he came to El Cajon last year with his wife and two children because the U.S. is safer for them. He stayed for about a year in Utah and liked the people but said he moved to El Cajon to follow his father.

El Cajon, which means “drawer” or “big box” in Spanish, was incorporated in 1912 and became the largest of a swath of San Diego suburbs known as East County. Located in a valley, the absence of ocean breezes brings sweltering summers but home prices are on the lower end of the San Diego market, making it a draw for many families. Annual per-capita income is $20,430, well below San Diego County’s $31,043.

The city, with a downtown community center named for Ronald Reagan, has long been bedrock Republican but the party’s edge over Democrats in voter registration has narrowed to 3 percentage points.

There is no precise count of Iraqis in El Cajon but they have made San Diego their second-most popular metropolitan destination in the U.S. after Detroit. Whites make up a shrinking majority, while about a quarter of the city’s residents are Latino, 6 percent are black, and 4 percent are Asian.

Refugees take English classes at the Main Street office of the International Rescue Committee, one of nine resettlement organizations in the country.

David Murphy, the committee’s executive director in San Diego, said recently that refugees are often assigned to cities where they have family and friends or where there is an established community of immigrants who share their culture.

Last month, the 10,000th Syrian to resettle across the U.S. under a year-old program arrived in El Cajon.

Al Espinosa, a retired carpenter of part-Mexican descent and a resident since 1980, was heartbroken by Olango’s death and how it linked the city to other places such as Ferguson, Missouri, and Baton Rouge, Louisiana, that have seen unrest after police shot and killed black men.

“I thought this would never happen here,” said Espinosa, 69. “Now we’re on the world stage.”

The fatal shooting by police of Alfred Olango has brought attention to El Cajon, a diverse suburb of San Diego that has seen a surge of refugees, many from Iraq and more recently from Syria.

Here’s a look at the city: