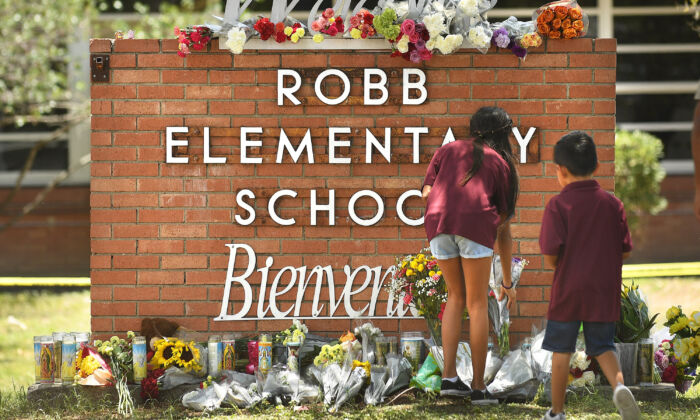 A Uvalde police officer whose teacher wife was killed in the mass shooting at Robb Elementary School was blocked by law enforcement from trying to help her, an official said.

Ruben Ruiz wanted to get to his wife, teacher Eva Mireles, when she called him after being shot inside the classroom where she was trapped with the shooter on May 24.

Instead, officers took his gun, detained him, and led him away from the scene, Texas Department of Public Safety (DPS) Director Steven McCraw told a Texas Senate hearing on Tuesday, streamed by PBS News Hour.

“We got an officer, Officer Ruiz, whose wife had called him and said she had been shot and she’s dying,” McCraw said. “What happened to him was he tried to move forward into the hallway, he was detained and they took his gun away from him and escorted him off the scene.”

Eva Mireles was one of two teachers fatally shot along with 19 fourth-grade students. Almost 90 minutes passed from the time 18-year-old shooter Salvador Ramos entered the school at 11.33 a.m. and when a specialized Border Patrol unit finally entered the classroom at 12.51 p.m. and killed him.

During that time, children were still making calls to 911 from within the classroom, McCraw said.

Further, a new image from inside the school timestamped 19 minutes after the shooter entered shows officers standing in the hallway with high-powered rifles and a ballistics shield.

The hearings, being held on Tuesday and Wednesday, are seeking to uncover why officers waited for around 90 minutes before killing Ramos.

McCraw told the hearing that one of the biggest problems during the mass shooting was the “lack of leadership” and “misinformation that’s being provided” on the scene which contributed to what one Texas senator said was a “complete failure” by law enforcement that day.

As more experienced officers arrived on the scene, McCraw said they were being told the shooter was “contained” and that Uvalde school police chief Pete Arredondo was in an office “negotiating or talking to the subject.”

As a result of what McCraw described as “misinformation” being conveyed to arriving officers, who McCraw said had “no reason to discount” what they were told, the officers went about providing support elsewhere, not knowing that some children were still alive in the classroom and calling 911.

“So everyone is treating it, that comes in afterwards, you’re in the hallway and you’re looking at it, and you’re being told this, there’s no reason to discount that,” McCraw said. “Now, certainly if you heard, ‘Well, wait a minute, we’re getting 911 calls from children in the classroom.’ And we didn’t know the timeline.”

Active shooter protocol demands law enforcement go to where the shots are firing and prevent loss of life as a first priority.

He testified that there were enough officers on the scene to have stopped the shooter three minutes after he entered the building.

However, the “misinformation” meant officers believed the situation had changed from an active shooter to barricaded subject, which has different protocols.

Responding to parts of McCraw’s testimony, state Sen. Juan Hinojosa, a Democrat for District 20, said that the officers should have charged the classroom.

“In this situation, some law enforcement might have been killed charging in there, but that’s why you signed up for the job. There’s always a risk involved,” he said.

UPDATE: This article has been updated to correct the name of Ruiz’s wife to Eva Mireles and clarify that Pete Arredondo is the school police chief.