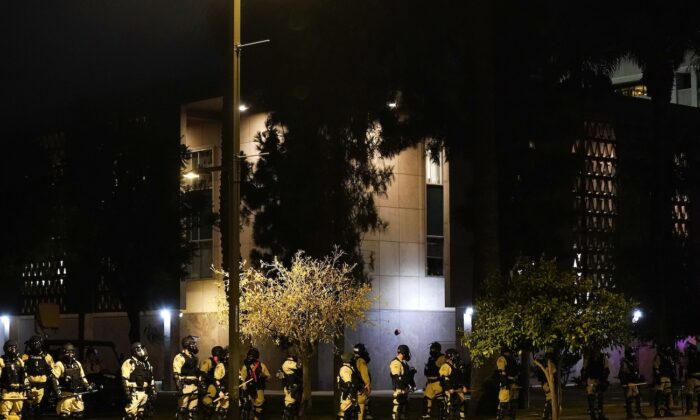 Police deployed tear gas late on Friday in efforts to disperse protesters who gathered at the Arizona Capitol building in Phoenix in the wake of a ruling by the U.S. Supreme Court that tossed out the landmark 1973 Roe v. Wade decision.

Police declared the gathering an unlawful assembly after several among the thousands of protesters began hitting glass walls and doors of the state Capitol building, with one person having smashed a window at the state Department of Agriculture building on Adams Street, reported The Arizona Republic.

Afterward, SWAT team members with the state’s Department of Public Safety fired tear gas from the building to disperse the protesters, KPHO-TV reported. It wasn’t immediately known if there were injuries or arrests.

Lawmakers in the Arizona Senate were forced to halt their meeting temporarily around 8:30 p.m. due to the commotion outside. The senators proceeded to huddle for about 20 minutes in a basement inside the building as they rushed to complete their 2022 session, said State Sen. Martin Quezada, a Democrat.

Stinging tear gas wafted through the Capitol afterward via the system that circulates the air, forcing the Senate to move its proceedings to a hearing room instead of the Senate chamber.

The tear gas lingered in the courtyard between the state’s Senate and House buildings. Crowds had left the area by 9:30 p.m., according to reports.

“Protesters threatened to break the AZ Senate entryway glass,” State Sen. Wendy Rogers, a Republican, wrote on Twitter while she and other senators were voting on a series of bills. She said the protesters were “a mix of anti-life protesters, anti-education choice protestors, and Antifa.”

According to the Arizona Daily Independent, a Planned Parenthood protest began at 6 p.m. at the Arizona Capitol, followed by a protest organized by the Phoenix Party for Socialism and Liberation and the Phoenix branch of Radical Women an hour later.

State Sen. Kelly Townsend, a Republican, said on Twitter at the time: “We are currently there being held hostage inside the Senate building due to members of the public trying to breach our security. We smell teargas and the children of one of the members are in the office sobbing with fear. I expect a J24 committee to be created immediately.”

She said later, “Everyone is okay, and we are finishing our work.”

“While Arizona State Senate members were wrapping up passing important legislation for the session, extremist demonstrators made their way to the entrance of the Senate building and began forcibly trying to make entry by breaking windows and pushing down doors.”

The statement described the situation as “terrifying.”

State Senate President Karen Fann thanked members of law enforcement and their quick response, and said the situation “could have been a destructive and dangerous situation.”

Thousands of demonstrators took to the streets Friday in cities nationwide to protest the overturning of Roe v. Wade. Most carried signs, chanted slogans, and listened to speeches.

Arizona Gov. Doug Ducey, a Republican, signed a measure in March banning abortions after 15 weeks of pregnancy. It is set to take effect in October. The 15-week timeframe in the law is the same as that of Mississippi’s law that’s being upheld in the Supreme Court’s ruling on Friday that repealed Roe, in a case called Dobbs v. Jackson.

The Roe v. Wade ruling had for decades enabled abortion up to the 24th week of pregnancy nationwide.

“Roe v Wade was a poorly-reasoned ruling that had no Constitutional basis,” Ducey said in a statement on Friday. “The Supreme Court has made the right decision by finally overturning it and giving governing power back to the people and the states. I am proud that Arizona has been ranked the most pro-life state in the country. Here, we will continue to cherish life and protect it in every way possible.”

Arizona has a state law that was in place for over 100 years prior to the 1973 Roe ruling. The law automatically outlaws abortion except for when the mother’s life is at stake. It has a mandatory prison sentence of two to five years for violators.

“Roe made Arizona’s prohibition on abortion unenforcable. That law should now be enforcable in most Arizona counties, prohibiting abortions in the state except to save the life of the mother,” Cathi Herrod, president of the Center for Arizona Policy, said in a statement. “This will not only save innocent lives but will protect women from the undeniable emotional and physical harms of abortion.”

It is unclear which of the two laws—the pre-Roe law or the one Ducey recently signed in March, will take effect in Arizona.

State Senator Nancy Barto, a Republican who authored the 15-week abortion ban bill, said it will be the courts that decide, reported ABC15 Arizona.