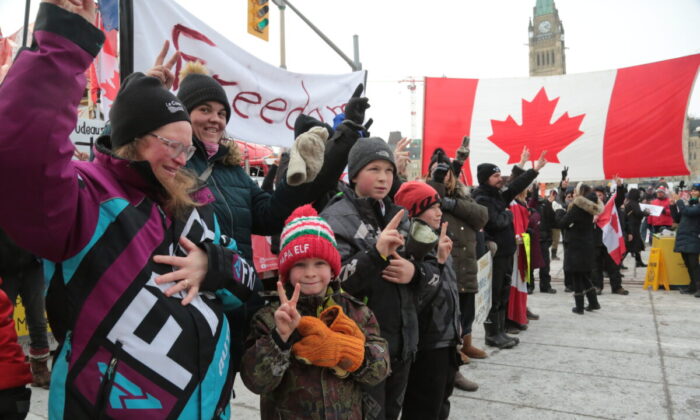 The Ontario Provincial Police in an internal memo described the Freedom Convoy as “calm, festive and family oriented” on the same day the federal government invoked the Emergencies Act.

“Speakers were again telling people to walk away from agitators and thanked the police for remaining calm. Many of the speakers were promoting love and peaceful protest, some even taking quotes from the Bible,” the memo read, as first reported by Blacklock’s Reporter.

“Speakers were also wishing everyone a happy Valentine’s,” it continued, later adding there were “children on Wellington Street playing hockey.”

Prime Minister Justin Trudeau and other members of the Liberal cabinet have previously stated that they invoked the Emergencies Act on the advice of law enforcement.

“We invoked the act because it was the advice of non-partisan professional law enforcement that existing authorities were ineffective at the time to restore public safety,” said Public Safety Minister Marco Mendicino while testifying before the parliamentary joint committee on the declaration of emergency on April 26.

“When efforts using existing authorities proved ineffective, the advice we received was to invoke the Emergencies Act.”

Trudeau also told the House of Commons on April 27 that “it was only after we got advice from law enforcement that we invoked the Emergencies Act.”

RCMP Commissioner Brenda Lucki sent an email to Mendicino’s chief of staff hours before cabinet invoked the Emergencies Act saying that police had “not yet exhausted tools that are already available through the existing legislation” to clear protesters from downtown Ottawa.

“There are instances where charges can be laid under existing authorities for various Criminal Code offences occurring right now in the context of the protest,” Lucki wrote in the email dated Feb. 14. “The Ontario Provincial Emergencies Act just enacted will also help in providing additional deterrent tools to our existing toolbox.”

OPP Commissioner Thomas Carrique told the POEC on Oct. 27 that he agreed with Lucki’s words in the email.

Carrique also said he agreed with the testimony of OPP Superintendent Pat Morris, who told the POEC on Oct. 19 that “no credible intelligence of threats” associated with the Freedom Convoy had been discovered by the Provincial Operations Intelligence Bureau.

“I spoke about that with colleagues from the Canadian Security Intelligence Service and with the [RCMP] Integrated National Security Enforcement Team [INSET], and they did not see things that reached their threshold in terms of what would be deemed a threat to the security of Canada,” Morris told the commission.

Morris said the Convoy was “conspicuous for the absolute lack of criminal activity.”

Omid Ghoreishi and Noé Chartier contributed to this report.