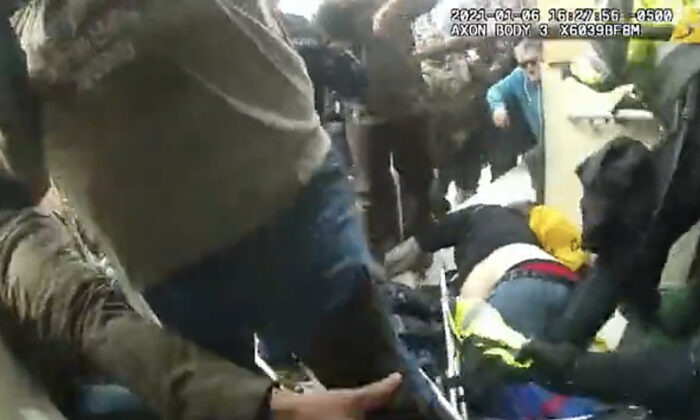 The beating of an unconscious Trump supporter by a DC Metropolitan Police Department officer at the U.S. Capitol building on Jan. 6, 2021, was deemed to be “objectively reasonable” after an investigation by the department’s Internal Affairs Bureau, The Epoch Times has learned.

The Internal Affairs investigation was opened in September 2021, based on a complaint filed by a Texas man who assembled video evidence of the officer striking an unconscious Rosanne Boyland with a steel baton and a large wooden stick at the entrance to the West Terrace tunnel at the U.S. Capitol.

Boyland, 34, of Kennesaw, Georgia, was pinned under a pile of protesters who fled the tunnel when police deployed crowd-control gas. After several minutes of being crushed by the weight of other fallen protesters, Boyland lost consciousness and stopped breathing, witnesses have said.

Boyland traveled to Washington that day to attend the “Stop the Steal” rally and hear President Donald Trump speak at the Ellipse. She became trapped in a crowd that sought entry to the Capitol through the West Terrace tunnel.

As Boyland lay unconscious, DC Metro Police Officer Lila Morris repeatedly struck her with a steel baton and what appeared to be a wooden walking stick, according to a video recording.

While Boyland wasn’t pronounced dead until more than 90 minutes later, she appeared lifeless when police dragged her body from the West Terrace tunnel entrance into the Capitol at 4:31 p.m.

There is confusion about what lifesaving efforts were made by police after Boyland was moved into the Capitol. Testimony before a congressional committee suggested that police attempted CPR at 4:26 p.m., which wasn’t possible because, at that time, Boyland still lay on the concrete receiving CPR by protesters Jake Lang and Ronald McAbee.

The DC medical examiner said Boyland died of an accidental overdose of Adderall, a prescription medication used to treat attention deficit hyperactivity disorder; that ruling has sparked skepticism and outrage from Boyland’s friends and family. Her father, Bret Boyland, said Rosanne had been taking Adderall for about 10 years.

The attack on Boyland disturbed Gary McBride of Decatur, Texas, so much that he filed a police brutality complaint with the Metropolitan Police Department on Sept. 14, 2021.

McBride, who spent most of his career in the oil and gas industry, has assembled a library of videos recorded at the Capitol on Jan. 6; he’s become a professional video sleuth after studying thousands of hours of footage from that day.

McBride went back and forth with various Metropolitan Police Department officials for more than two months before being told via email on Nov. 15 that Morris had been cleared of any wrongdoing.

“The use of force within this investigation was determined to be objectively reasonable,” wrote Capt. David K. Augustine, director of the Risk Management Division of the MPD Internal Affairs Bureau. “Officer Morris is still employed with the MPD and not facing criminal charges related to the use of force on January 6.”

McBride said he found the reasoning and conclusion shocking.

“It told me right there that it’s OK for them to do what they do. They are doing exactly what they want to do. They don’t care if you know or see,” McBride said.

“They just showed me that they’re going to go beat somebody and kill them, but they have the power to say, ‘That was objectively reasonable.’ And we’re supposed to accept that and say, ‘OK.’”

Morris, who had just reached the front line in the West Terrace tunnel, is seen on bodycam video picking up what appears to be a walking stick or a tree branch. She raised the weapon over her head with both hands and struck Boyland at least four times in rapid succession. While the stick broke at one point, Morris continued to strike at Boyland until other officers pulled her back.

Morris, who was hailed as a hero after Jan. 6, was feted as a guest of honor at Super Bowl LIV in Tampa, Florida.

Philip Anderson of Mesquite, Texas, who was at the bottom of the same pile that crushed Boyland, called MPD’s use-of-force ruling “absolute [expletive].”

“There is nothing reasonable about hitting a nonresponsive woman lying on the ground over the head with a baton,” Anderson, 26, told The Epoch Times. “They say it’s reasonable because she [Boyland] was a Trump supporter.”

Anderson says there was cause from the beginning for an independent investigation by a special prosecutor or a grand jury.

“The fact that they have been lying from the beginning is reason enough for investigation,” he said. “The only reason why anyone even knows this is because I barely survived and am here to now call out their blatant lies [about] the woman that they killed.”

McBride sent two videos as evidence along with his police-brutality complaint. One of the videos was removed from YouTube but is available on Rumble; the other video is still accessible on YouTube.

Bret Boyland asked the Metropolitan Police Department for copies of bodycam video from various police officers in the terrace tunnel. That request was denied.

“Wednesday was nine months from our daughter’s passing and we still have many unanswered questions to what happened to her that day,” he wrote in a Freedom of Information Act (FOIA) request in fall 2021.

“It has been determined that the information you are seeking is part of an ongoing investigation and criminal proceeding,” Hughes wrote. “With exception of the portions of the video that has been shown publicly, MPD cannot fulfill your request. The release of this information could interfere with the enforcement proceedings by revealing the direction and pace of the investigation.”

The Epoch Times also made a FOIA request for Morris’s bodycam footage for her entire shift on Jan. 6, 2021. That request was denied, but for different reasons than those given to Bret Boyland. The department cited privacy grounds for denying the newspaper’s request.

Bret Boyland said the family was initially denied a copy of Rosanne’s full autopsy report, but since has obtained the document.

“Through our lawyer and additional FOIA requests, we have obtained the full autopsy report, which has been forwarded to the pathologist,” he told The Epoch Times.

The family hired its own forensic pathologist to review the DC medical examiner’s report on Rosanne Boyland’s death.

Bret Boyland said heavily redacted bodycam footage he obtained shows that police did attempt CPR on Rosanne after she was moved into the Capitol.

“There were two BWC [body-worn camera] videos that started with the officers pulling Rosanne into the building past the police line,” he said, “and it did show multiple officers attempting to revive Rosanne and gave CPR for about 10–12 [minutes] straight; then they appeared to load her on some kind of mail-room cart and moved her somewhere else.”

McBride said one thing he found especially troubling on one of the videos is that despite being unconscious during the attack, it appeared Rosanne Boyland could feel the blows to the head.

“When she takes that second hit to the head, watch her left arm, her left arm straightens up and lifts off the ground,” McBride said.

Winchell told an Atlanta television station in 2021 that when Rosanne was struck by Morris for the final time, Rosanne’s nose started bleeding.

“In our mind, she was still alive at that point,” Bret Boyland said.

Rosanne also suffered three or four broken ribs on each side of her chest, her father said. Those injuries could have come from the repeated CPR attempts, the pressure of being under the large pile of bodies, or from the baton blows from Morris, he said.

Augustine said a report on Officer Morris’s use of force hasn’t been released to the public. He said the factors involved in police use of force are outlined in MPD’s online policy (pdf), updated in January 2021.

“Members of the Metropolitan Police Department (MPD) shall value and preserve the sanctity of human life at all times, especially when lawfully exercising the use of force,” the policy states. “In situations where the use of force is justified, the utmost restraint should be exercised.”

“She had a choice; that officer had a choice,” he said. “She could have helped her right there at that point in time. But she chose to grab the stick and start hitting her.”