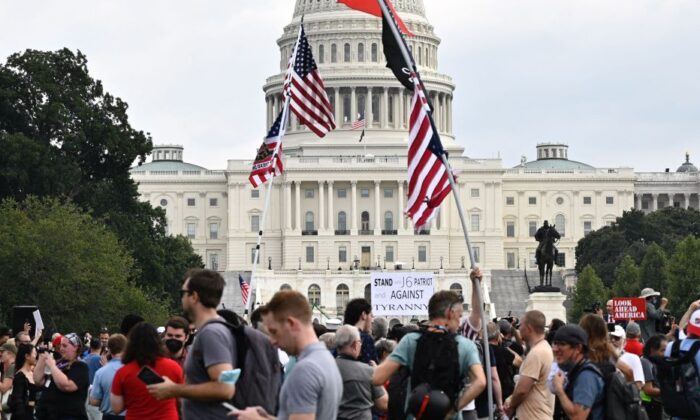 Demonstrators gather for the "Justice for J6" rally in Washington on Sept. 18, 2021. (Pedro Uugarte/AFP via Getty Images)
US News

Law enforcement officers and members of the media appeared to outnumber protesters during the “Justice for J6” rally in Washington on Sept. 18 in support of those who have been detained by the federal government for their alleged roles in the Jan. 6 breach of the U.S. Capitol.

Only a few hundred people attended the event, according to video footage and photos. U.S. Capitol Police confirmed to news outlets that between 400 and 500 people showed up.

The protesters found themselves in the midst of numerous officers clad in riot gear, along with plainclothes police and law enforcement on bicycles and horses.

Several arrests were made by U.S. Capitol Police, the agency said in a Twitter post, including one after someone spotted “what appeared to be a handgun on a man in the crowd.” Capitol Police officers detained the suspect, although it isn’t “clear why the man was at the demonstration.”

Two individuals in a vehicle with a Louisiana license plate were arrested on Sept. 18 with extraditable warrants out of Texas, Capitol Police said. One individual was accused of possession of a firearm, and the other was accused of a probation violation.

Despite the low turnout at the pro-Jan. 6 rally, “Justice for J6” drew significant media coverage and social media engagement. While some media outlets on Sept. 19 blared that the small crowd size was a sign that former President Donald Trump’s influence is decreasing, Trump last week suggested that people shouldn’t attend the event.

“On Saturday, that’s a setup,” Trump told the Federalist, appearing to preempt the claims that his political influence is waning. “If people don’t show up they’ll say, ‘Oh, it’s a lack of spirit.’ And if people do show up they’ll be harassed.”

Trump on Sept. 17 said that he believes individuals who are being detained or prosecuted for taking part in the Jan. 6 protest and breach are “being persecuted” by the federal government.

“In addition to everything else, it has proven conclusively that we are a two-tiered system of justice,” Trump wrote in a statement. “In the end, however, JUSTICE WILL PREVAIL!”

Over the past few months, concerns have been raised about several dozen individuals who were arrested and then detained in a federal jail in Washington over their alleged role in the Jan. 6 incident.

Lawyers and family members for some of the defendants told EpochTV in July that some detainees are being subjected to solitary confinement 23 hours per day, are being denied medical care, and are being blocked from accessing their defense counsel.

“Solitary confinement is a form of punishment that is cruel and psychologically damaging,” Warren said in an interview published in April. “And we’re talking about people who haven’t been convicted of anything yet.”