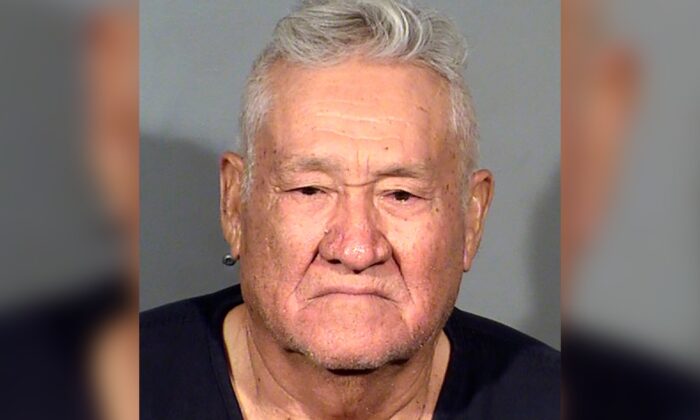 LAS VEGAS—A landlord argued with his live-in tenants over unpaid rent before opening fire with a handgun in a small house near downtown Las Vegas early Tuesday, killing two women and wounding a man who survived nine gunshots, police said.

The shooting suspect, Arnoldo Lozano-Sanchez, 78, surrendered after a one-hour standoff with police who arrived about 12:30 a.m local time. to find one woman dead outside the pink one-story home and the wounded man coming out the door, said police Lt. Ray Spencer.

The names of the dead women and the wounded man, all in their 50s, were not immediately made public. The man was hospitalized in critical condition.

Lozano-Sanchez was questioned by police and booked into the Clark County jail pending an initial court appearance Wednesday on murder and attempted murder charges. Records did not reflect if he had a lawyer.

Authorities had no immediate information about whether the rent dispute had any connection with a nationwide coronavirus pandemic eviction moratorium that expired last week and was then partially reinstated, Spencer said.

The modified moratorium, enacted under the authority of the Centers for Disease Control and Prevention (CDC), is facing legal challenges and is scheduled to expire on Oct. 3. It applies in areas of high transmission of the COVID-19 delta variant, including Nevada, where state health officials on Tuesday reported 1,125 new COVID-19 cases since Monday.

Police confiscated a 9mm handgun, Spencer said. The number of shots fired was not immediately known pending autopsies of the slain women.

One of the women left the three-bedroom house and returned before the fatal confrontation, Spencer said.

“We don’t know the specifics, but information from witnesses is that it’s all over money not paid for their portion of the rent,” Spencer said in an interview with The Associated Press.

Spencer said he didn’t know details about the rent dispute or the amount of money involved.

Property records show the home was built in 1945 and Lozano-Sanchez bought it in 1986. It is now surrounded by two-story apartment buildings fortified by high-locked gates.

Neighborhood activists Paul Marino Jr. of Sober Homiez Outreach Ministry and James Mitchell, lead pastor at the House of Judah, stopped to pray together in front of the pink house but said they didn’t know the owner well.

The two men said they provide support to transient, homeless, and low-rent residents in the several-block area shadowed by the Strat hotel tower and known locally as Naked City. A property manager said single-bedroom units on the block rent for about $750.

Rose Hernandez, a neighbor whose second-floor apartment overlooks the back of the pink house, said she looked out after midnight and saw Lozano-Sanchez sitting in a chair outside his back door when police arrived. She said she didn’t see a gun.

“He’s just sitting there, calm, like nothing happened,” Hernandez said.

Hernandez said she didn’t know Lozano-Sanchez personally but knew that he lived in the back of the house and often sat on the small patio between the house and its matching pink shed.

Christine Miller, an official with the Legal Aid Center of Southern Nevada that represents tenants in rent disputes, called the shooting a tragic event. She declined further comment until more facts are known.