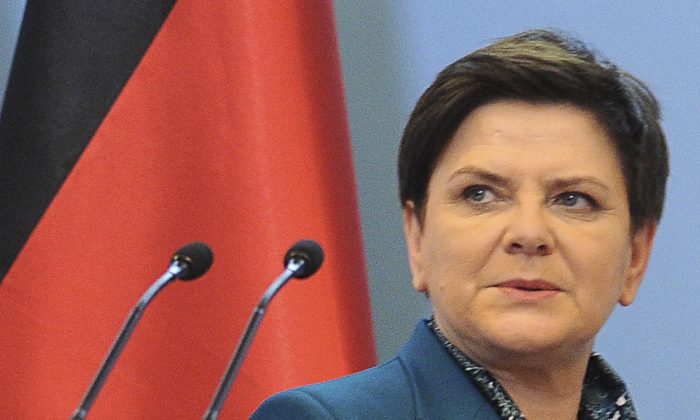 WARSAW, Poland—Poland’s Prime Minister Beata Szydlo is in stable condition and can carry out her government duties as “nothing serious happened to her” when her limousine was involved in a car crash, her spokesman said Saturday.

However, Rafal Bochenek said Szydlo, 53, was undergoing tests, including X-rays, and will remain “for some time” in a government hospital in Warsaw, where she was brought on her own request. He could not immediately confirm whether she will attend the weekly government meeting on Tuesday.

Dr. Andrzej Jakubowski, who first examined Szydlo after the crash Friday night, said she suffered some slight injuries and was in some pain, but that the prognosis was good. TVP INFO, a state TV program, said she suffered bruises to her chest from her seat belt.

The accident occurred shortly before 7 p.m. Friday in the southern town of Oswiecim, Szydlo’s hometown, where she was arriving for the weekend.

Her car was in the middle of a three-car convoy going at some 50 kilometers (30 miles) per hour on the town’s main road when a small Fiat car they were overtaking suddenly turned left and into her limousine, causing it to hit a tree, according to local police spokesman Sebastian Glen.

The 21-year-old driver of the Fiat has been questioned and has admitted causing the accident, Glen said.

The driver could face up to a three-year sentence if convicted of causing a traffic accident which resulted in injuries, said Janusz Hnatko, spokesman for prosecutors in the southern city of Krakow.

Szydlo’s driver and her bodyguard were also hurt and hospitalized.

It was the latest in a string of road incidents involving top state officials.

In November, several vehicles in a Polish government convoy collided during a state visit to Israel. Szydlo was not in one of the cars involved but two other Polish officials had minor injuries.

In March 2016, a limousine carrying President Andrzej Duda skidded into a ditch due to a punctured tire. Duda was unhurt.